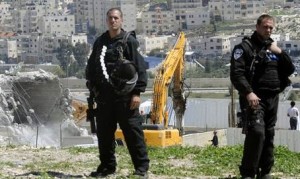 Hamas claims that the IDF destroyed the Samaria home of a Hamas leader living in Turkey on Thursday night. The claim comes after an IDF source on Thursday revealed that the leader, Salah al-Arouri, likely is behind the kidnapping of the three Israeli teens last week.

His Arora home was destroyed on Thursday night, according to a report this morning from the Hamas Al-Aqsa news agency. The IDF’s 900 Brigade infantry unit reportedly was active in the Ramallah area Thursday night.

The Hamas report, according to Arutz Sheva, claimed that al-Arouri’s family living in the home received an eviction notice overnight, and in the morning IDF soldiers raided the empty home, searching it intensively and then proceeding to destroy it.

Saleh al-Arouri – a former West Bank resident deported after serving a prison sentence in Israel, who is now a leading figure in Hamas overseas operations – is thought to have been a key figure for years in attempts to initiate terror attacks in the West Bank, funding and arranging the training of terror cells.

“I have no doubt that al-Arouri was connected to the act,” an official said.

There is an increasing belief in the Israeli security services that the kidnapping was directed by Hamas’ overseas hierarchy. Al-Arouri is answerable to Hamas’ political bureau chief Khaled Mashaal.

“For Hamas, there is one explicit instruction, and that is to continue to kidnap Israelis.”