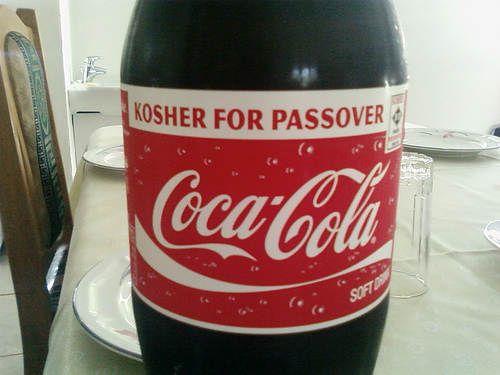 In the 1930s, Rabbi Tobias Geffen of Atlanta began to investigate the hidden ingredients inside mass-produced foods and to evaluate whether those ingredients conflict with kosher laws. He then set a precedent by getting The Coca-Cola Company to make a kosher-for-Passover version of its soft drink, convincing the company to substitute the grain alcohol used in the processing of its drink to alcohol derived from molasses.

Geffen’s achievement was a response to the fact that in the 1920s, “Coke became an incredibly popular beverage in America,” and “Jews adopted a custom of making it available to children during the Passover seder in lieu of wine,” historian Roger Horowitz—whose book, “Kosher USA: How Coke Became Kosher and Other Tales of Modern Food,” will be published by Columbia University Press this April—told JNS.org.

This step by Coca-Cola stood out at a time when few mainstream food manufacturers were making kosher-for-Passover products.

“Coke was an enormous consumer product in the 1930s, and jealously guarded its formula,” Horowitz said. Much of the company’s decision, he explained, rested on its confidence in Geffen that he would not reveal the drink’s secret ingredients, and the episode was “an enormous asset in persuading other conventional food firms to secure kosher certification.”

Geffen personally issued a kosher-for-Passover certification on Coke, eventually passing the baton to another rabbi. Meanwhile, the founder of the Orthodox Union (OU) and its kosher-certification labeling, Abraham Goldstein, was another figure dedicated to the science of figuring out what’s inside foods and whether those ingredients are acceptable for Passover as well as for kosher-observant consumption year-round. He was particularly interested in ice cream, surveying its manufacturers to determine what they were putting inside their products and ultimately deciding that Breyers ice cream, for instance, is acceptable to eat during Passover.

But Goldstein was simply reviewing foods as they existed at the time. The fact that Coca-Cola chose to make a distinct version of its drink for Passover, therefore, was a big exception.

Rabbi Moshe Elefant, Chief Operating Officer of the OU’s kosher-certifying arm, told JNS.org that subsequently, the OU began to certify Coke for Passover around 1989-1990, after the company removed high fructose corn syrup from its Passover drink and replaced it with sugar. These bottles are known today for their distinct yellow caps.

When the OU certifies a product as generally kosher, it is typically sufficient for rabbinical supervisors to make occasional visits to a company to make sure that the product is being produced in accordance with kosher standards. When it comes to Passover, however, making a product that is kosher for the holiday requires full-time rabbinical supervision. One other food that illustrates this situation is quinoa, a type of grain that was only in recent years certified as both kosher and kosher for Passover by the OU.

“One of the staples of the kosher diet now is sushi. But there’s a problem with sushi on Passover because sushi is made with rice, and Jews of Ashkenazi descent don’t eat rice on Passover. How are you going to survive eight to nine days without sushi? You make it with quinoa,” Elefant said.