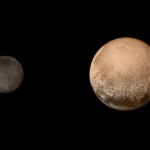 The New Horizons spacecraft has reached Pluto. NASA’s probe sped past the dwarf planet at 31,000 miles per hour early Tuesday, as the agency released its most detailed image of the outlying body yet.

“We have completed the initial reconnaissance of the solar system, an endeavour started under President Kennedy more than 50 years ago and continuing to today under President Obama,” said mission head Alan Stern.

New images of Pluto won’t be available until New Horizons safely commits them all to memory—likely a little after midnight Wednesday. Read more at BBC News.