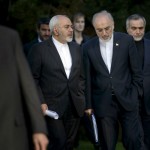 The nuclear deal with Iran facing a deadline on Tuesday will ensure the country’s nuclear activities can continue, Iranian media reported.

“According to the technical annex, all the nuclear activities of Iran will continue,” an Iranian diplomatic source party to the nuclear talks in Vienna this week told semi-official state news agency Fars.

The official spoke with knowledge of the technical annex in the final deal, one of five annexes currently being deliberated among negotiators from Tehran and six world powers: the U.S., U.K., Russia, China, France and Germany.

The so-called technical annex covers issues such as “nuclear research and development, [the] Fordo nuclear enrichment center, [the] Arak heavy water reactor, and the type of the centrifuges that will be used by Iran for the production of stable isotopes.”

While the State Department had called for dismantling Iran’s nuclear infrastructure in the past, the Obama administration softened that line in the several months since a framework agreement was announced at Lausanne, Switzerland.

“Iran is not simply going to dismantle its program because we demand it do so,” said President Barack Obama in April upon the announcement of the framework.

According to a draft appendix to the final deal obtained by the Associated Press, Iran will be allowed to keep its Fordo underground facilities running for isotope production, rather than uranium enrichment. But AP noted that the technologies for both processes are very similar and thus it is possible to quickly re-engineer isotope production for enrichment.

U.S. think tank the Foreign Policy Initiative noted that at the Arak facility, the light-water reactors that Iran would be allowed to install under the current framework “can also produce the requisite amount of bomb-grade plutonium to develop a nuclear weapon.”

Negotiators are running up to the July 7 deadline for a final deal, but Secretary of State John Kerry on Sunday said negotiations still “could go either way.”

Israeli diplomatic sources meanwhile said on Sunday that the current deal discussed by negotiators was far worse than the Lausanne framework because it offered new concessions: on the centrifuge allowance, research and development and sanctions relief.

According to Israeli daily Yediot Achronot, Israeli Energy Minister Yuval Steinitz has been making diplomatic rounds between the U.K., Germany and France to highlight apparent shortfalls in the deal.