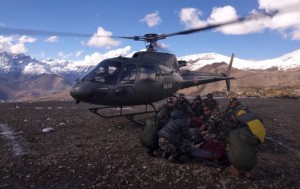 In the aftermath of a blizzard and avalanche in the Annapurna mountain range, Nepalese authorities have confirmed the death of 43 people, including three Israelis. Michal Gili Charkesky, a 36-year-old Israeli woman from Givatayim, is still missing.

Israel-based Harel Insurance chartered a helicopter to rescue stranded Israeli trekkers. Nadav Khalifa, who has coordinated Harel’s efforts in the region, told Israel Hayom that his team “tried to rescue all the Israelis who were stranded at high elevations; we managed to bring them down with the helicopter, we rescued 40 on Friday and another 20 a day earlier.”

Professor Avraham Rivkind, head of the Shock Trauma Unit at Hadassah Medical Center in Jerusalem, treated the Israeli trekkers who arrived at the hospital.

“The majority of the patients suffer from frostbite and other related injuries; one was treated for fractures. … We expect a long recovery period, and only then will we be ready to assess the state of the internal organs,” Rivkind said.