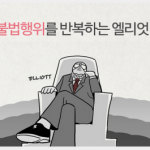 Major Jewish human rights group the Simon Wiesenthal Center (SWC) told South Korean conglomerate Samsung that the removal of antisemitic cartoons published on its website was insufficient, and demanded an explanation as to why the cartoons were posted in the first place.

The call came just days after the company issued a statement decrying antisemitism, in response to articles that appeared in local media outlets blaming “Jewish money” for opposition to a proposed merger between two subdivisions of the company.

“The blatant Jew hatred cartoons invoking genocidal stereotypes is outrageous and makes a mockery of earlier statement by Samsung,” said SWC Associate Dean Rabbi Abraham Cooper, in an email seen by The Algemeiner. “The belated removal of these Nazi-like caricatures is not enough. The Simon Wiesenthal Center does not consider this matter closed. At this point Samsung is not believable.”

“I represent a constituency of 400,000 member families who are demanding to know why your company facilitated such behavior,” Cooper said further.

The cartoons in question targeted Paul Singer, an American-Jewish billionaire hedge fund magnate who opposed the merger as being against the interests of shareholders, himself included. The caricatures, published by the official website of Samsung C&T itself, featured a character called “Vulture Man” intended to mock Singer. They depicted Vulture Man viciously exploiting children and poor people, the New York Observer reported, adding “Yes, there were hatchets and machine guns.”

Additionally, as the controversy heated up, a link emerged between the South Korean government and one of the websites, named Mediapen, that originally published the anti-Jewish assaults on Singer.

According to local media, Lee Eui Chun, the former CEO of the business blog, who held the position as recently as two months ago, is currently a deputy minister in the government.

The recently published articles described Jews as “wielding enormous power on Wall Street and in global financial circles” and accused financial advising group Institutional Shareholder Services Inc. (which advised against the merger deal) of being founded on “Jewish money.”

While Lee left Mediapen.com in May to assume his ministerial post, sources said “Lee and his wife retain a substantial ownership stake in Mediapen.” But because Mediapen is a private company there are not public records to confirm the connection.

Lee, under Second Vice Minister Kim Jong, is in charge of media affairs.

A recent Anti-Defamation League survey of antisemitic attitudes in South Korea found that 53 percent of Korean adults hold antisemitic views of Jewish people. The survey showed that 59 percent of South Koreans believe “Jews have too much power in the business world” and 57 percent are convinced that “Jews have too much power in international financial markets,” so the cartoons may have been in line with an apparent trend.