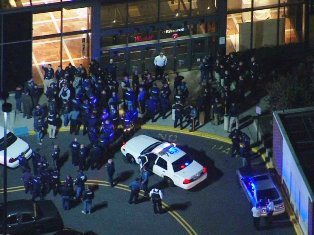 I have just finished buying electronics at Best Buy at the Garden State Mall in New Jersey. I have our three young children with me, ages twelve, seven, and five. It is about 9:10pm. I have brought the kids with me because, due to the statewide elections the following day, they have no school.

My wife and 15-year-old daughter are in the mall proper. Since it closes at 9:30pm, I call Debbie and tell her I will walk the kids into the mall’s main building and meet her.

Best Buy is detached from the mall. We walk across the parking lot and into the entrance. There is a carousel in front of us and I decide I should put the kids on it until the mall closes.

Suddenly dozens of people start running toward us screaming “There’s a shooter. SHOOTER. Run. Get out.” There is no need to think. I am not in shock but clear-headed. There have been so many shootings lately in America that I know exactly what this is. A crazy person is on a shooting rampage in a mall and this time we are not watching it on TV, we are not reading about it on the net. We are at the center of it.

I put the kids in the car. I am outside on the phone. I call again. Mercy of mercies, my wife answers. She is trembling as she speaks. “There’s a shooter, Shmuley, right outside a store we’re in. The salesperson saw him. He was carrying an AK-47, holding it in the air. We heard about 6 shots. We’re terrified. Where are you? Get out. Get out of the mall. Are the kids OK?”

I assure her that we’re safe, in the parking lot. I push her to address where she is. Is she safe? She says, “We’re hiding, locked in a stock room with about 10 other people. But the door is made of glass.”

I tell her that whatever she does she must not come out. Answer your phone. She explains that the reason the phones went to voice mail was that they were both calling 911. I tell her, “No matter whom you’re speaking to, answer if I call.”

I call the owners of the Westfield Mall Corporation, the Lowy family, whom I know from my time as a Rabbinical student in Sydney, Australia and with whom I have stayed in touch. Answering machine. I call a mutual friend in LA. He ultimately and miraculously gets the head of mall security on the line. I tell him where my wife and daughter are hiding. He assures me someone will come to get them. He is comforting and assuring. Your wife and daughter will be OK.

Senator Cory Booker of New Jersey, my close friend whose swearing-in my wife and I attended just last Thursday in DC, pops instantly into my mind. He has battled assault weapons in New Jersey for years. He has shared with me countless stories of tragic shootings in our state. Having been mayor of Newark, right nearby, he will know the local police. He will expedite the police presence and get them to rescue the people inside. He will be able to tell them where my wife and daughter are so they can be rescued. Cory is very close to my wife and children. I text him in bold letters. “CORY THERE IS A SHOOTER IN THE GARDEN STATE MALL!!” I text his senior adviser, a close friend, who calls me right back and assures me he is on the phone with the police. He is informing them of the many people trapped inside and my wife’s whereabouts.

His adviser proceeds to call me every few minutes and calls my wife as well. He is an angel from heaven. Debbie is calmer now because the sounds of the gunshots have subsided.

Suddenly the people in the parking lot are running as well. “Gun shots, gun shots,” they scream. I can swear I hear loud pops. I get into the car. I am driving in circles in the parking lot. I want to be safe with the kids, but I don’t want to leave the mall because my wife and daughter are inside.

I am calling my wife every minute, getting her to assure me she is OK and that her cell phone is not going to die. “Don’t leave me with no way to contact you and don’t leave where you are. And tell the people with you to speak softly.”

The children in the back of the car are crying. I am trying to assure them that their mother and sister are going to be fine. God is going to protect them. I tell them we have to pray. We recite Psalm 20 in Hebrew. We repeat it. I call my wife again. She is telling me she is OK and that there is no sound of gunfire. They continue to hide in the store room.

I drive out of the parking lot and reach a 7-11 so the kids can buy something and calm down. There is a woman outside shaking, speaking on her cell phone. She tells me she was in Nordstrom’s, heard all the shots, and ducked under the clothing and hid. She got out. Her family who was with her are safe. She asks if I have anyone inside the mall and I tell her. She tells me she prays my family will be safe.

On Twitter I spread the word of the shooting. I ask everyone to pray for the people inside without saying that my wife and daughter are there. I ask over and over again to pray generally that the people within should emerge safely.

I am calling my wife every few minutes. I am thinking to myself that America has gone crazy. This past Friday night, for Shabbat dinner, the main point of conversation of our guests was the terrible shooting in Los Angeles at LAX and the other shootings that week at schools. Now, we’re at the center of it. Could this really be happening?

My wife finally tells me that she thinks they are beginning to evacuate people. They can see scores of police outside the store. I tell her not to move until they come for her.

I get the kids back into the car and we drive to a parking lot overlooking the Garden State mall where we can see SWAT teams moving into the building and a growing police presence. There are helicopters overhead.

Senator Booker calls in terrible anxiety to ask if my wife is OK. At that moment, as if by a miracle, she calls on the other line and tells me that the SWAT teams have come to move them out. I connect the calls on my phone. Cory, ever the gentleman, tells my wife not to panic and he is so happy to hear she is OK. His warmth and caring comforts us both.

A few moments later my wife calls me to tell me she is safely out. SWAT members screamed to them to move out with their hands in the air. A military scene was all around her as they made them run out of the building. SWAT members, she says, fill the entire mall. The gunman is still at large and they are briskly moving people out, with bullet proof shields protecting them.

With heartfelt thanks, I begin reciting Psalm 92. “It is good to give thanks to the LORD, to sing praises to the Most High.” I also think to myself how incredible and brave the police are.

My wife and daughter are safe. It’s a miracle. Thank you, Oh Lord, for your kindness to me and my family, I say to myself. I will try and be a better person, a better servant of yours, Oh Lord. Thank you, Lord, for Your protection and goodness.

An employee that was hiding with my wife and daughter drive them to a nearby supermarket where we are reunited. Seeing them safe fills me with gratitude and gladness. The smaller children are thrilled to see their mother. Their tears end but, traumatized, they are not smiling.

We hear on the news that no one has been injured. We go back to the parking lot – police all around us – to retrieve my wife’s car and we return home in safety.

But how long will it be until the next shooting, and what will we finally do as a nation to prevent it?

As a boy of about nine I watched a police officer murdered right in front of me in Miami Beach, Florida. It was April 1st, April Fool’s Day, which ever since has been a day of trauma for me. I even took my wife and children to the spot where he died. I shall never forget the sound of the gunshot that echoed so loudly that it nearly broke my eardrums.

And now again I am traumatized by a shooting.

How many more will die before America finally wakes up?