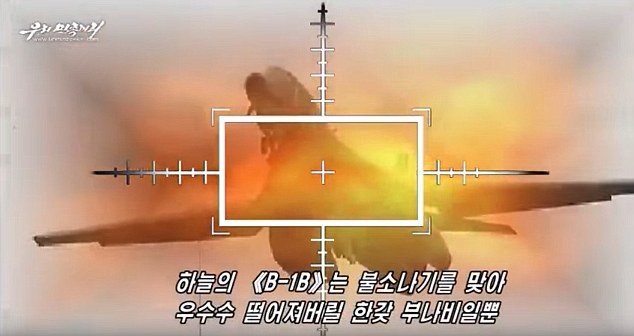 The violent videos came after President Donald Trump derided North Korea’s leader, Kim Jong Un, by calling him “little rocketman” and vowing at the United Nations to “totally destroy” North Korea if it threatens the United States or its allies.

Photoshopped pictures from a state-owned propaganda website, DPRK Today, purported to show a North Korean missile making a direct hit on B-1B Lancer bombers and an F-35 fighter jet. In the doctored shots, the planes were engulfed in flames.

Another falsified video on the website showed a missile launched from a North Korean submarine strike the USS Carl Vinson, a nuclear-powered supercarrier. Like the planes, the ship explodes in a firestorm.

The fake news targets were apparently chosen because B-1B bombers escorted by Air Force fighter jets flew in international airspace off the coast of North Korea on Saturday in a clear demonstration of force. And the Carl Vinson led one of two carrier strike groups that conducted joint exercises with South Korea and Japan earlier this year.