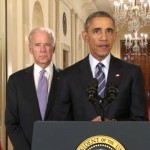 President Obama said Tuesday that the peace of the world rests upon letting the nuclear deal with Iran stand.

“Put simply, no deal means a greater chance of more war in the Middle East,” Obama indirectly warned Congress, which now has 60 days to review the deal.

The president, speaking from the White House, said the agreement met “every single one” of his bottom lines.

Iran right now has enough enriched uranium to create 10 nuclear weapons, Obama said, and this deal would get rid of 98 percent of that stockpile.

Republicans and several Democrats have stressed their wariness or opposition to the deal. Read more at The New York Times.