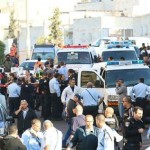 Palestinian Authority media on Monday incited Arabs to murder Jews in revenge for what they still claim was the “execution by settlers” of an eastern Jerusalem driver who according to all experts committed suicide.

Even an Arab forensic expert said the bus driver took his own life, but the man’s family and several Palestinian Authority media outlets not only refused to accept the evidence but blamed Jews for allegedly murdering him.

Today’s slaughter of Jews in the heart of the neighborhood of Har Nof in Yerushalayim apparently was well-planned. It also brought an immediate joyous response from Hamas. The terrorist organization declared that the massacre was a “natural reaction” to the death of the bus driver.

Meanwhile, the death toll in today’s attack rose to five as a police officer who was hit during the shootout succumbed to his injuries.