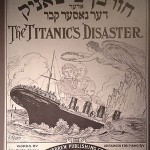 How many Jews were aboard the Titanic before it sank? This question will likely forever remain unanswered.

“According to the White Star Line company’s list, there were several hundred Jews onboard,” says Eli Moskowitz, who studied the story of the Jewish passengers on the most famous ship in history, which sank 102 years ago, claiming the lives of 1,517 people.

Moskowitz, an educator who defines himself as a “Titanic fan,” turned an MA seminar paper in history into a book about the Jews of the unfortunate ship, which is about to be published soon.

He donated the knowledge he acquired during his research to the Titanic exhibition from the United States, which is docking at the Israel Trade Fairs Center in Tel Aviv until the end of August and is partly dedicated to “the Jews of the Titanic” – from the Jewish newspapers of the era, through the stories of the passengers who died and their widows, to the ship’s kosher menu.

Moskowitz notes that the Titanic, like other ships which crossed the ocean on their way to “the new world,” represented the conflict of the era: Should Jews leave the danger of pogroms in the ‘shtetl’ and risk assimilation?

“Even before the Titanic set sail, there were rabbis which saw it as the modern Tower of Babel,” he says. “They perceived the idea of a ship ‘immune from sinking’ as defiance towards the Creation and God. There was no debate over the issue, but they definitely used the Titanic as an allegory.”

Some 2.7 million Jews emigrated during that period, most of them due to religious persecution. “We are talking about the era of the Kishinev riots,” says Moskowitz. “In addition, one of the only ways to leave was by forging documents. Many people sailed on the Titanic using fake names.

“Since there was not enough information about the passengers, apart from names, it’s hard to know who was Jewish. A person whose name sounded completely non-Jewish could have been Jewish. The bodies of the absolute majority of them were never found.”

According to the passenger list, there were offspring of some Hasidic families onboard, including Gurshon Cohen, Abraham Hyman, Jenie Drapkin and other unlucky people.

A thorough review of the first class notes reveals the name of fashion journalist Edith Rosenbaum, who boarded the Titanic with as many as 19 suitcases filled with clothes. Entire rooms on the ship were dedicated to Miss Rosenbaum’s luggage, but the only item which survived the tragedy with her was the set of keys of those 19 cases and a musical toy pig.

The wealthiest Jewish passenger onboard was Benjamin Guggenheim, a famous American mining magnate. “When he realized that the ship was about to sink, he asked to die with a glass of high-quality brandy in his hand,” says Moskowitz. “The richest Jew on the Titanic refused to put on a life belt, sat in the reception hall and waited for his death. His body wasn’t retrieved either.”

Another passenger, Adolphe Saalfeld, a Briton of German descent, was a wealthy man and perfume maker who wanted to open a perfumery in the United States. The letters he wrote to his wife, in which he expressed his longing for her, remained onboard. “Saalfeld was among the first-class passengers who were rescued,” says Moskowitz.

“He returned to England, but because he was a male survivor from the first class, he was ostracized from society. He moved to London, where his health quickly deteriorated. After he died, he was buried at the Orthodox synagogue in Golders Green.

“His perfume samples, which sank into the deep water, were found several years ago. When the small bottles which are now displayed as part of the exhibition were first reopened, they still emitted a faint odor.”

The first-class women passengers got to enter the lifeboats first. There were enough boats to save less than half of the passengers and crew. The third-class women and their children were forced to find their way through the corridors and depth, and deal with a foreign language, on their way to the lifeboats. Not all of them made it.

Were there men in the third class who managed to survive against all odds?

“There were actually. One of them is a passenger named Abraham Joseph Hyman. As a third-class survivor, he wasn’t ostracized. On the contrary. Hyman arrived in New York, saw the kosher delis on every corner, and decided to open one in his hometown of Manchester. He named it The Titanic. It still exists, by the way, and it’s still strictly kosher.”

The halachic dilemmas were quick to follow. In a Q&A segment displayed at the exhibition, a rabbi is presented with the story of an agunah (a Jewish woman “chained” to her marriage) named Zvia Maisner, who survived the Titanic. The body of her husband, Simon, was never found. She was permitted to remarry.

“Apart from the issue of agunot, the burial matter was complicated in itself,” says Moskowitz. “Some 1,500 people died in the disaster, and only 340 bodies were found. Half of them were buried in the sea. The body was documented and then attached to a stone and returned to the sea, for reasons of cost. The bodies that were taken out arrived at Halifax n Nova Scotia, Canada.