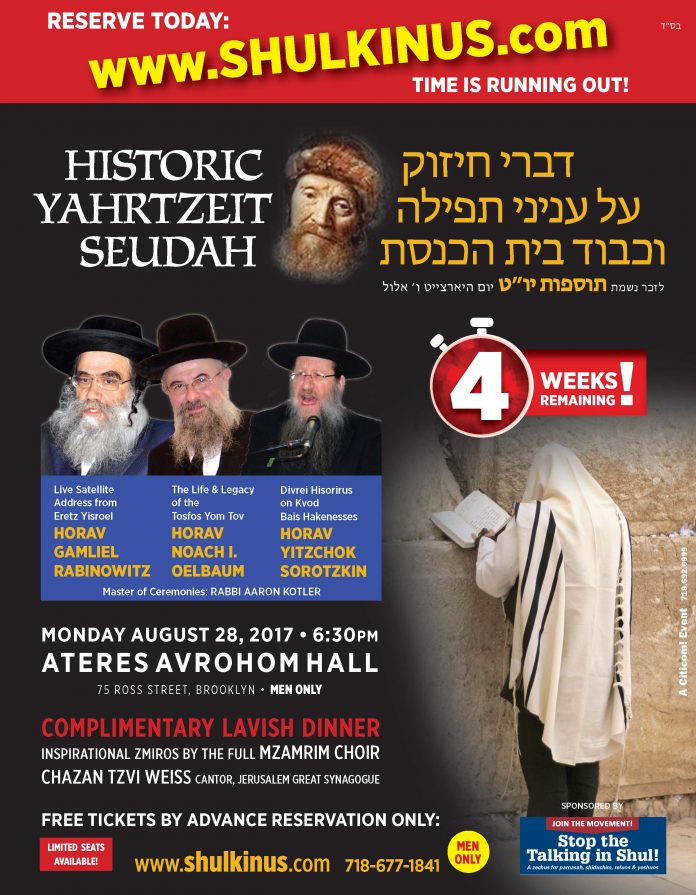 It started with a visit to the grave of the holy ‘Tosfos Yom Tov’, Harav Yom Tov Heller the venerable 17th Century sage who revolutionized the study of Mishnah with his penetratingly vast commentary filled with insights and elucidations that are studied daily in study halls around the globe.

Besides for his mastery of Mishna, Talmud, Kabalah and all areas of Torah, the Tosfos Yom Tov is well-known for composing many Tefilos and Piyutim, of which the most well-known is his Mi Shebairach, blessing those who are careful to honor the sanctity of the Bais Haknesses by not talking during davening. This Mi Shebairach is recited in many Shuls around the world, and has led to the sanctification of Hashem’s Name.

Last year, a group of fine individuals from New York took a trip to Cracow, Poland, and after visiting the Kever of the Tosfos Yom Tov, became inspired to invest time, energy, resources and money in spreading his holy mission of combating the plague of talking during Tefilah, something he, and they, saw as an affront to the Kavod of Hashem, and possibly a cause of much of the misfortune being experienced by Klal Yisroel.

That moment of inspiration, experienced by a group of 40 men, turned into a global movement that has spread like wildfire. This year, on the Yahrtzeit of the Tosfos Yom Tov, 6 Elul, the Stop the Talking in Shul movement is inviting all men over the age of 21 to a historic dinner, free of charge, to celebrate the mission of the Tosfos Yom Tov and to be Mechazek each other in strengthening the Kavod of Hashem’s house, the Bais Haknesses.

The event will take place on Monday, August 28, 2017, at the Ateres Avrohom ballroom in Brooklyn, and will feature Divrei Chizuk, via satellite, rom Rav Gamliel Rabinowitz Shlita, as well as Divrei Hisorerus from Rav Yitzchok Sorotzkin Shlita, and a speech about the life and legacy of the Tosfos Yom Tov by Rav Noach Isaac Oelbaum Shlita.

The Mezamrim choir will perform, as well as a special guest from Jerusalem, Cantor Tzvi Weiss, who was present at the trip to the kever of the Tosfos Yom Tov last year. Advance registration is required in order to be admitted. Reservations can be made by visiting www.ShulKinus.com

Attend to be inspired! Attend to inspire others! Attend to do your part to honor Hashem’s name!

May this event be a tremendous Zechus for the Neshama of the holy Tosfos Yom Tov and may it serve as a vehicle to encourage heavenly mercy on all of Klal Yisroel.