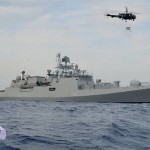 A week after an Indian warship docked at Israel’s Haifa port as a sign of increasingly “robust” ties with the Jewish state, India’s foreign minister expressed her country’s continued support for the Palestinian cause while on a visit to Egypt.

“Our strong traditional support to the Palestinian cause remains unwavering even as we pursue good relations with Israel,” Indian Minister of External Affairs Sushma Swaraj said Tuesday in a speech to the Egyptian Council for Foreign Relations. She added that India has “strong interests in the Arab world and [has] been strongly committed to its various causes,” and has “been supportive of your aspirations regarding the resolution of the Palestine-Israel issue,” the Jerusalem Post reported.

Swaraj is expected to visit Israel before 2016, as is the case for both Indian President Pranab Mukherjee and Prime Minister Narendra Modi.

On Aug. 19, the Indian warship INS Trikand, dubbed the ”frontline warship of the Indian Navy,” docked at Israel’s Haifa port with the aim of “bolstering the robust ties between Israel and India,” according to the Indian Ministry of Defense.