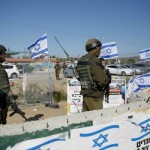 The number of Israeli soldiers who died during their service in 2015 was the lowest in a decade, the Israel Defense Forces said.

According to IDF Personnel Directorate data, a total of 36 soldiers died in 2015. Six were killed in the line of duty, seven in road accidents, and two in other accidents. Six died of terminal illnesses, and 15 other deaths were considered “suspected suicides.”