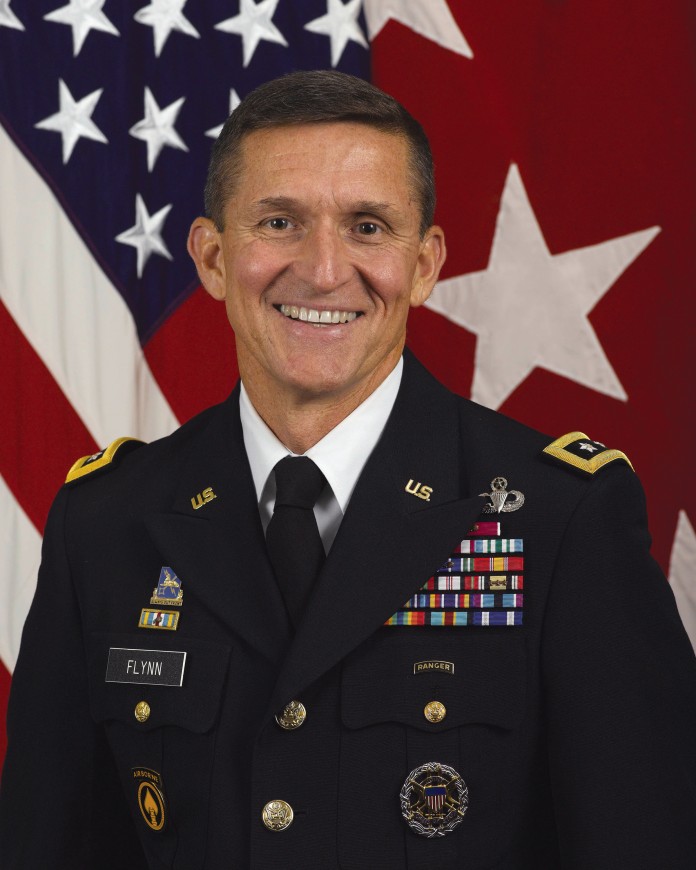 After weeks of focusing on a group of current and former elected officials in his search for a running mate, Donald Trump is increasingly intrigued by the idea of tapping retired Lt. Gen. Michael T. Flynn to project strength and know-how on national security, according to four people familiar with the vetting process.

The people who spoke with The Washington Post on Saturday did so on the condition of anonymity to discuss their private conversations in recent days with Trump’s confidants and campaign aides.

The turn toward a military figure is being driven by Trump himself rather than by his advisers, the people said, and comes as the real estate mogul is telling his friends that national unrest may demand a “tough and steady” presence alongside him on the ticket.

In Flynn, they added, Trump thinks he would have a partner whom he trusts, based on their close working relationship over the course of the campaign on policy. And he likes the image of a businessman and a general coming to Washington as outsiders.

The shift in how Trump is evaluating his short list has also been spurred by his growing sense that he does not necessarily want or need a running mate who will satisfy Republican insiders, in spite of long saying that he would probably go that direction. Instead, and after some testy exchanges with GOP lawmakers during his visit Thursday to Capitol Hill, Trump is more open than ever to a non-politician.

As multiple people explained, Trump is eager to rally the party around him but sees the convention and other parts of the campaign as integral to that goal, with the vice-presidential nod potentially more important in terms of what it broadly symbolizes to voters.

“Trump-Flynn. I’ve heard him say that, kind of test out the sound of it,” one person said of how Trump is mulling the possibility. “I think it’s a brand he finds appealing.”

A Trump campaign spokeswoman declined to comment. A spokesman for Flynn was unavailable.

Flynn’s formal vetting by the Trump campaign was first reported by the New York Post. In an interview with the newspaper, Flynn did not deny that he was under consideration.

“All I would say is that I have been honored to serve my country for the past three decades and look forward to serving in other ways now that I am retired from the U.S. Army,” Flynn said. “I’ve been a soldier too long to refuse to entertain any request from a potential commander in chief.”

Still, Trump remains undecided on his vice-presidential pick, the people said. While warming toward Flynn, Indiana Gov. Mike Pence and former House speaker Newt Gingrich, among several others, are being vetted, and many of his associates are urging him to go with a seasoned governor or senator who could help to unite the party.

Trump is said to be understanding and open to that argument, but he is slightly bored by the prospect of going with a traditional Republican. As a longtime celebrity, he has countered that advice with points about the need for surprise and star power. But he is torn about whether his gut instincts should outweigh political calculation, the people said.

“I like the generals. I like the concept of the generals. We’re thinking about – actually there are two of them that are under consideration,” Trump said Wednesday on Fox News. He then acknowledged that for months he has been “really looking to go more the political route.”

Some Trump advisers are making a case against Flynn, saying he is a possible risk because of his lack of political experience and uncertainty over how he would handle intense national media scrutiny. His views on domestic policy are mostly unknown and his Democratic registration could also be a big problem among Republicans who want Trump to pick a proven conservative leader.

In U.S. history, military service is a common trait among those holding executive office. And there is precedent for populist candidates to pick a general as a running mate. George Wallace, running as a segregationist in 1968, picked retired Air Force Gen. Curtis LeMay. In 1992, independent candidate Ross Perot picked retired Navy Adm. James Stockdale.

Like Trump, Flynn is not hostile toward Russia. Last year, he sat next to Russian President Vladimir Putin at a Moscow dinner honoring RT, the English-language network aligned with the Kremlin that broadcasts into the United States and other Western countries.

One person encouraging Trump to perhaps choose a general is Sen. Jeff Sessions, R-Alabama, who has become a force inside of the campaign. He shares Trump’s view that, while unorthodox, a general could excite voters from both parties who want to see wholesale change in domestic politics and an aggressive approach to combating terrorism.

Flynn, a Rhode Island native whose book “Field of Fight: How We Can Win the Global War Against Radical Islam and Its Allies,” comes out July 12, has shown a willingness to be an attack dog, a role often played by vice-presidential candidates.

“If it were me, I would have been out the door and probably in jail,” Flynn told CNN in February when asked about presumptive Democratic presidential nominee Hillary Clinton’s email practices while secretary of state. He called on her to drop out of the race.

Flynn did not leave the Obama administration on amicable terms. In 2014, he was effectively forced out of the Defense Intelligence Agency as part of a leadership shake-up after clashing with officials over his management style and vision for the agency.

Beyond Flynn, another name that had been mentioned in campaign talks is retired Gen. Jack Keane, the hawkish former Army vice chief of staff. Trump campaign allies have been in touch with Keane in recent weeks though he has not submitted vetting documents.

When reached by phone Saturday, Keane said he would not be willing to be part of the Republican ticket.

“I’m not in a position to go back into public service,” Keane said, and advised Trump to resist the temptation to pick a general.

“We have a sufficient political class, and the military doesn’t have to get involved in high national office,” he said. “The days of doing that, post-Civil War and post-World War II, are gone.”