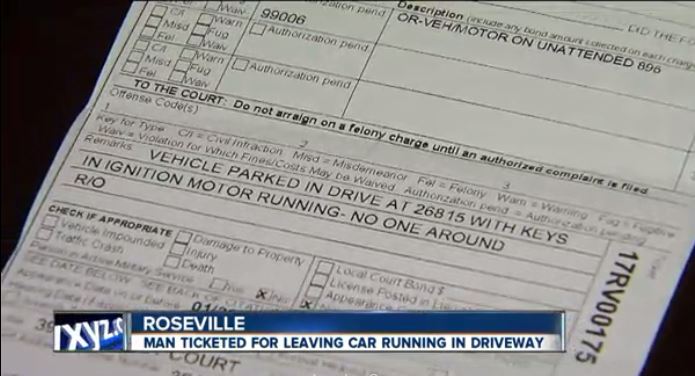 It was a chilly Midwestern morning when a Michigan man named Taylor Trupiano, 24, kept his car running in his friend’s driveway in Roseville, Michigan. Leaving the keys in the ignition, he ducked into her house. He was there, Trupiano said, only to deliver diapers for his friend’s 2-year-old son before jotting back out again.

“I was in and out in probably about seven, eight minutes,” Trupiano said to Detroit’s ABC 7 News.

When Trupiano returned outside, he discovered that he now owed the city of Roseville $128. A ticket stuck to Trupiano’s car outlined the violation: vehicle parked in drive, with keys in the ignition, “motor running – no one around.” 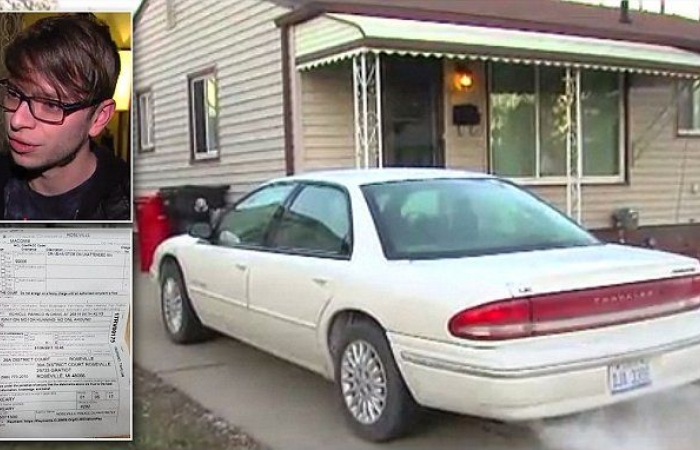 The 24-year-old at first believed that the ticket was some sort of prank. Incredulity gave way to anger. “I’ve done this every day for seven years,” he said, according to a local Fox affiliate. “Every person warms up their car. We live in Michigan.” Trupiano told Click on Detroit that he had no idea he was violating a law, and wished that the patrolling officer could have approached him instead of issuing the fine.

Trupiano posted the ticket to Facebook, saying that “giving me a ticket for warming up my car in my own damn driveway” was “wasting the taxpayer’s money.” He also called the officer who left the ticket a “(expletive)” (Trupiano later retracted the obscenity in a subsequent Facebook post: “Thinking it over, it wasn’t the appropriate thing to say because I do respect police officers for what they do for us everyday.”)

Although Michigan does not have a statewide law prohibiting warming up cars in driveways, James Berlin, the Roseville Police chief, defended the practice. Cities or municipalities in the state may have their own regulations to curb the practice.

“We have five to 10 cars stolen this way every winter,” Berlin told ABC 7 News. “It’s dangerous, and of course it drives everyone’s insurance rates up. It drives our crime rates up.” He encouraged the tickets because stolen cars, the police chief argued, can lead to dangerous high speed chases.

The lawman expressed little sympathy for Trupiano’s ignorance of the local prohibition.

“You see the disparaging comments he made about my officer?” Berlin said to Click on Detroit. “Drop dead.”

Fox 2 Detroit reported that Trupiano was set to appear in court on Jan. 26 in Roseville’s District Court. Trupiano wrote on Facebook he would burn the ticket at a music performance.