A record 15,000 people visited the kever of Yehoshua bin Nun last night to mark his yahrtzeit. Yehoshua is buried in Heres, in Samaria, a village dating back to Biblical times which is now a Palestinian Authority-controlled town. His kever lies next to those of Nun, his father, and Calev ben Yefuneh.

Last night’s visitors included Jews from across the religious spectrum, both men and women, of all ages, both Israelis and tourists.

Rabbi Elyakim Levanon, the chief rabbi of Samaria, led the many thousands in the tefillah of “Aleinu L’shabeyach.”

Rabbi Metzger spoke of Yehoshua and Calev’s greatness as the only two of the 12 meraglim who remained faithful to their task and confident in G-d’s ability to bring them into the land. He also called on the government to provide more regular access to kever Yehoshua and to kever Yosef which, he noted, was supposed to be under Israeli control under the Oslo Accords. 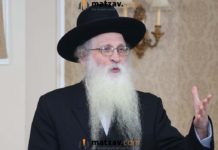