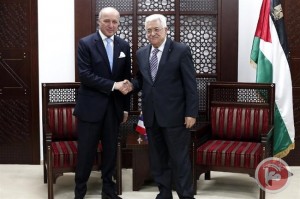 The remarks came on the eve of a key meeting of the executive committee of the PLO to discuss forming a new cabinet after the government collapsed this week amid a deepening rift with Hamas, the de facto rulers of the Gaza Strip.
Abbas is thought to be seeking to replace the government of technocrats — formed last year to overcome rivalry between Palestinian factions — with a government of politicians.

“(Abbas) told me this government of national unity could only include women and men who recognize Israel, renounce violence and who are in agreement with the principles of the (Mideast) Quartet,” Fabius said at a press conference in Jerusalem after holding talks with Abbas in Ramallah.

Noting that those conditions ruled out Hamas, Fabius added: “And that suits us perfectly.”

Hamas has been designated a terrorist organization by the European Union and the United States.