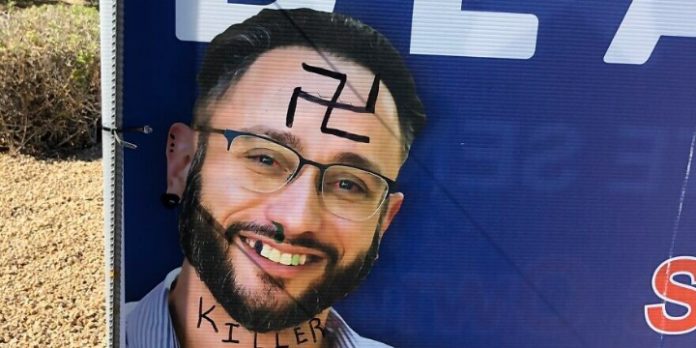 Two years ago today, an antisemitic white supremacist opened fire on the last day of Passover at the Chabad of Poway synagogue in California, an attempted act of mass slaughter that resulted in one death and many wounded, including the rabbi. Sadly, it was one of many extremist mass shootings we have seen in recent years, motivated in large part by the white supremacist conspiracy theory known as the “great replacement” and representative of the growing normalization of hate spreading through our nation, and across the globe, like a wildfire.

And, just as the wildfires that have devastated the West Coast in recent years were predicted by decades of scientific data, the mass shootings in Poway, El Paso, and Atlanta came after ADL and others had elevated the indisputable evidence of amplifying intolerance, hatred and extremism. Today, we released our annual Audit of Antisemitic Incidents for the 2020 calendar year, a report we have published for more than four decades. Disturbingly, 2020 joins 2019, 2018, and 2017 as four of the five worst years in the more than 40 years that ADL has been collecting this information.

But is this really a surprise when one can turn on a major news network and see the replacement theory espoused in primetime to millions of viewers? Or log on to the largest social media service and be recruited by the Proud Boys? And, although our audit encompasses mostly incidents of harassment, vandalism, and assault perpetrated by individuals who are not extremists, the evidence we have compiled suggests that the climate of acceptable discourse toward Jews has worsened considerably in recent years and, as we have seen throughout history, hatred that targets Jews typically targets other marginalized groups too.

Once a fever dream of the dark web, “great replacement” ideas have found firm footing in the mainstream. As background, elements of the theory date back to early 20th century French Nationalism, and re-emerged a decade ago in an essay titled “Le Grand Remplacement,” by French writer Renaud Camus. He was obsessed by a vision of non-white and non-Christian immigrants who would destroy France replacing native white Christian Europeans. The conspiracy theory quickly spread to the United States and took hold within the American white supremacist movement, where it echoed the already popular “14 Words” rally cry of white supremacists, that unless immediate action is taken, the white race is doomed to extinction by an alleged “rising tide of color” purportedly controlled and manipulated by Jews.

What can we learn from the swift ascent of this repugnant theory? First, hate unchecked moves quickly. Even against a backdrop of limited social engagement in 2020 due to the pandemic, hate still managed to threaten and intimidate. Despite all the significant changes in our daily lives and interactions with others, 517 Nazi swastikas were daubed in acts of vandalism. Even in a year when people were quarantined indoors, Jews reported being harassed at a rate 10% higher than in 2019.

In the first part of 2020, antisemitic incidents were occurring at an alarming rate. Tensions were high in an election year in which the US president at the time actively courted racist supporters. The lockdown does seem to be the cause of the reduction in many of the incidents that we usually track, such as physical violence or acts of harassment at schools, colleges, and universities.

And yet, hate still found a way. In fact, a second insight from the report is that intolerance innovates. In the face of remote learning and telecommuting, bigots were far from daunted. They experimented with new approaches. In 2020, ADL tracked the emergence of Zoombombing, the grotesque practice of disrupting Zoom meetings or other video events. And, unsurprisingly, these incidents frequently targeted Jews, along with other racial and ethnic minorities. In 2020, ADL recorded 196 incidents of antisemitic attacks where racists intentionally disrupted live videoconferences. Of those incidents, 114 targeted Jewish institutions, such as schools and synagogues.

The data is stark, especially when you consider that the ADL Audit focuses on strict criteria for historical context: it does not even attempt to quantify the total amount of antisemitism online, where the hatred swirls like a tsunami. But, as communities reopen and people return to the real world, the message of our data is clear: we must remain vigilant. Indeed, we already have witnessed mass shooting incidents tragically returning to form as recurring occurrences, including attacks that have left deep wounds in the Sikh and the Asian American and Pacific Islander (AAPI) communities.

A third conclusion from this report: life online is inseparable from life offline. The dark chatter of obscure internet communities that inspired the Poway shooter has infected the public conversation. Already this year, we have seen how the changed climate kindles the flames of sustained conflict. Facebook groups push conspiracy theories about Jews and COVID-19; bizarre antisemitic accusations of Jewish “space lasers” are embraced by a member of Congress; and even new spaces like Clubhouse course with accusations that the Jewish people and the Jewish state are illegitimate, contriving their suffering to gaslight other minorities, rather than share authentic suffering. Such slander was generated from both sides of the ideological spectrum, a reminder that no political persuasion is immune to intolerance.

Because antisemitism so often has been the canary in the coal mine of hatred, the historic high of antisemitic incidents of the past several years should alarm far more than Jewish people. Alongside the rise in AAPI hate, the ugly open wound of racism against the Black community and vile conspiracy theories targeting immigrants, the odds of a large-scale, hate-fueled tragedy loom large. In the face of the evidence and considering the consequences, let’s make 2021 the year when we turn the corner on COVID, and also mount an Operation Warp Speed to stop the virus of hate in its tracks once and for all.

Jonathan A. Greenblatt is CEO and National Director of the Anti-Defamation League.

Leave a Reply to A Yid Cancel reply