A seminar dedicated to legal issues pertaining to shuls was held on erev Shabbos, November 27th, at Agudath Israel of America’s 87th National Convention. The seminar, attended by more than 70 rabbonim, shul officers and members of shul administrations, was one of six concurrent sessions the convention hosted as part of its Friday morning program.

In consonance with the theme of the previous evening’s plenary session – “Yisroel Asher Becho Espo’or: Promoting K’vod Shomayim in Our Business and Interpersonal Dealings” – the session sought to educate members of the klal regarding pertinent laws and rules. The session was the latest installment of Agudath Israel’s popular workshops on such matters, which have drawn many hundreds to a variety of locations in recent months. 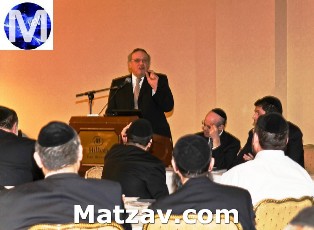 After brief introductory remarks made by Mr. Kupfer, Rabbi Chaim Dovid Zwiebel, Agudath Israel’s Executive Vice President and a guest speaker at this session, was introduced. Rabbi Zwiebel, echoing comments made by Gedolim just hours earlier at the convention’s Thursday evening plenary session, stressed the need for all, but especially mosdos, yeshivos and shuls, to be “gezetzlich” – honest and straight – in their business dealings.

The idea of the series of seminars emerged from a large gathering on July 28 in Borough Park that attracted well over a thousand people and whose proceedings were electronically transmitted to thousands more. One of the highlights of that assemblage, which featured speeches from major rabbinic figures and legal experts on the theme “Vi’asiso Hayashar V’hatov” – “You shall do that which is straight and good” – was an address by Rabbi Naftali Weisz, the Spinka Rebbe, who expressed public chagrin over mistakes that he himself had made and issued an impassioned plea for greater sensitivity to the importance of compliance with secular law. Indeed, Rabbi Weisz has been a driving force in helping Agudath Israel channel the community institutions’ determination to comply with applicable laws into the ongoing series of conferences geared for a variety of institutions and efforts. The Agudah has since presented workshops on September 23 at two separate events, one in Borough Park, another in Los Angeles; on October 27, in Flatbush; and on November 12 in Lakewood, New Jersey.

Mr. Kupfer thanked Rabbi Mordechai Biser, Esq., Agudath Israel’s associate general counsel for his guidance in organizing the seminar and gave special thanks to Rabbi Avrohom Nisan Perl, director of Torah Projects for the Agudah, who was instrumental in the planning of the session.

“Excellent presentation” commented one participant, who made the trip to the convention specifically for this seminar. “The topics were extremely relevant and the panelists were very clear. I am glad I attended.” Another participant, who traveled from across the United States to attend the convention, explained that for this seminar alone, the trip had been well worth it.

Those interested in purchasing a recording of this session, please email: ykupfer@agudathisrael.org.