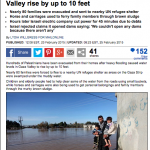 The Al-Jazeera network retracted and issued an apology for a story that claimed Israel purposely opened up dams in southern Israel that caused severe flooding in Gaza on Feb. 23.

Al-Jazeera posted on its website, “Editor’s note: An earlier version of this page hosted an article which stated that Israel had, without warning, opened a number of dams, which had resulted in a part of Gaza being flooded. This was false. In southern Israel, there are no dams of the type which can be opened. We apologize for this error.”

While AFP has taken down its video and story, it has not issued an apology. The Daily Mail posted a similar apology, but did not retract its article on the subject.

In actuality, the flooding in Gaza was the result of heavy winter rains and drainage issues in the region.

“The claim is entirely false, and southern Israel does not have any dams. Due to the recent rain, streams were flooded throughout the region with no connection to actions taken by the State of Israel,” an Israeli spokesman for the Coordinator of Government Activities in the Territories (COGAT) told the Committee for Accuracy in Middle East Reporting in America (CAMERA) media watchdog group.