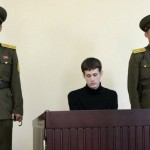 North Korea sentenced U.S. citizen Matthew Miller to six years of hard labor on Sunday. “He committed acts hostile to the DPRK while entering the territory of the DPRK under the guise of a tourist last April,” read a short statement published through the state media.

The trial of Miller, a 24-year-old from Bakerfield, California, lasted about 90 minutes, and he waived the right to a lawyer. While North Korea media had reported Miller tore up his passport and sought asylum in the country, Miller refuted that claim during the trial. When he was sentenced, the court announced it would not hear any appeals of the decision.

Miller is now the second American serving a hard labor sentence in the country. The other, Kenneth Bae, is currently serving a 15-year-sentence. Jeffrey Fowle, 56, is the other American detained in North Korea, and he is still awaiting trial. Read more.