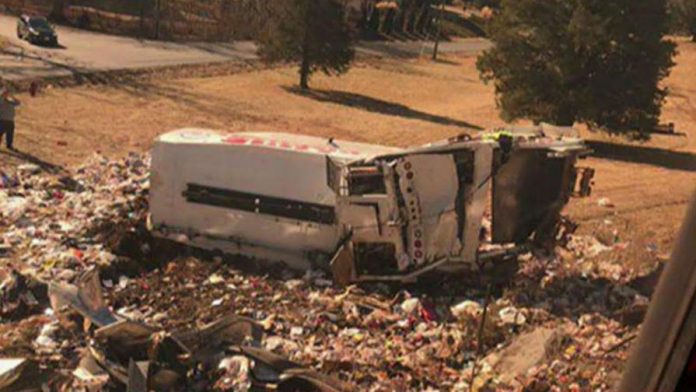 An Amtrak train carrying Republican lawmakers to an annual party conference in West Virginia collided Wednesday with a truck near Crozet, Virginia. The extent of injuries was not immediately clear.

Members of Congress and the local NBC affiliate were reporting one person was killed and two people were injured. Amtrak said there were no injuries to those aboard the train, which originated in Washington.

An official with Albemarle County Fire & Rescue declined to comment immediately on the number of injuries or fatalities but said the agency would provide more information once they know the extent of the casualties.

The train was carrying members of the House and Senate, some of their spouses and children and aides, although it was not immediately clear which members are on board.

“We appear to have hit a garbage truck,” said Sen. Mike Lee, R-Utah, who was reached by telephone on board the train.

“It looks like it’s been maybe cut in half. We can see garbage strewn around, and we can see the back half of the truck. There was a feeling of an impact and you could feel we had hit something. It took us maybe a quarter mile to stop.”

Lee said there are a few people “roughed up. Most of us hit a knee or a head on the seat in front of us but nothing too serious on board. I’m not sure about the driver of the truck yet.”

Rep. Thomas Massie, R-Ky., called the crash “loud and surprising. Some minor bumps and bruises in this car. We saw debris go by the left side of the train. The part of the truck we can see was decimated. Very relieved when the train came to a stop and still on the tracks.”

“It was a hard impact. It threw everybody up in the air a little. I don’t think anybody on the train is seriously injured, but I may be wrong,” said Sen. Jeff Flake, R-Ariz.

Flake, Sen. Bill Cassidy, R-La., and Rep. Brad Wenstrup, R-Ohio, joined medical personnel in carrying one of the injured passengers to an ambulance. Flake and Wenstrup did almost the exact same thing last summer in the shooting at a baseball field in Alexandria, Virginia.

Flake said his wife and 18-year old son are with him, but they are OK, he said.

Crozet is about 110 miles southwest of Washington, and 90 miles east of White Sulphur Springs, where members of congress were headed.

According to a statement from Amtrak, the train struck a vehicle on the track about 11:20 a.m.

The rail agency said local law enforcement officials were investigating “and inspecting the equipment for damage.”