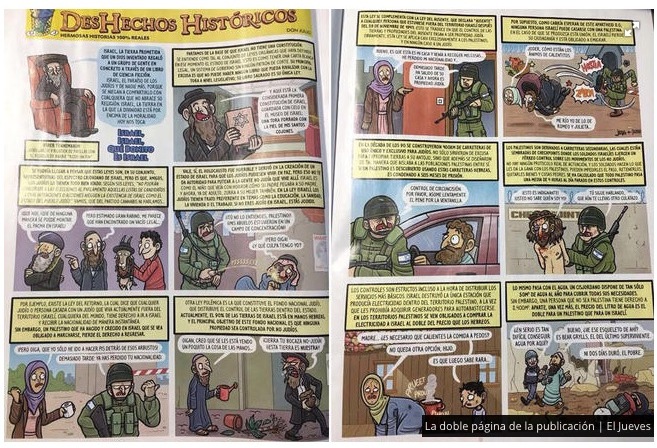 Anti-Semitism has come to the forefront in European media this week after an anti-Semitic cartoon was published in Spain and an Austrian prosecutor said that a magazine was justified in describing Holocaust survivors as a “plague.”

In Spain, the Jewish community is threatening legal action against the satirical left-wing magazine El Jueves, in which a cartoon was published showing hook-nosed Israeli soldiers urinating on Palestinians. Another part of the cartoon shows a hook-nosed Jew pushing a beaten Jesus. Along with these images, the illustrator alleges that Israel is “apartheid 2.0.”

“This is absolutely outrageous and obviously we are going to be seeking legal remedies,” said David Hatchwell, the president of the Jewish community of Madrid and vice president of the Federation of Jewish Communities in Spain, the Jerusalem Post reported.

“This [cartoon] could be taken from the Nazis’ Der Sturmer and nobody would notice the difference….These are lies, totally non-factual, and it’s done in a sophisticated enough way that people who know nothing about the conflict will think that Israelis are Nazi-like oppressors and it affirms every myth [about Jews] in Europe [held] for thousands of years,” he said, calling the cartoon “pure anti-Semitism.”

At the same time, survivors of Nazi concentration camps are outraged over a remark by an Austrian prosecutor approving of an article in the July/August 2015 edition of Die Aula, which stated that “the fact that a non-negligible portion of freed prisoners became a plague on people is deemed by the judiciary to have been proven and is only disputed today by concentration camp fetishists.”

The remark referred to those who survived the Mauthausen concentration camp. Prosecutors in the southern Austrian city of Graz had started a legal proceeding against the author of the article on charges of Holocaust denial and incitement to hate, but have since dropped the charges. The new controversy stems from remarks made by the Austrian prosecutor’s office explaining its decision that “it is plausible that the release of several thousand people from the Mauthausen concentration camp presented a burden for the affected areas of Austria.”

The International Mauthausen Committee, an umbrella group of national organizations of concentration camp survivors, said that while “it is not disputed that food necessary for survival was procured in a few cases against the will of the affected local population…to describe the term ‘plague’ as appropriate as a result not only flies in the face of historical fact, but also ridicules concentration camp victims who are still alive.”

In other Holocaust-related news, 93-year-old Reinhold Hanning of the western German city of Detmold was put on trial in Germany as an accessory to the murder of at least 170,000 people for his role as a guard at the Auschwitz concentration camp.

“When you think of these cases, don’t think of frail, old, sick men and women, but of young people who devoted their energies to a system that implemented the [Nazis’ so-called] Final Solution and aimed to obliterate the Jewish people,” said the Simon Wiesenthal Center’s Nazi hunter Ephraim Zuroff, Reuters reported.