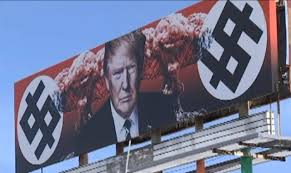 There are many words that could describe the President Donald Trump-ridiculing billboard that went up in Phoenix on Friday – menacing, hateful, apocalyptic.

But there’s one adjective that’s particularly vexing to the people who live on Grand Avenue near Fillmore Street: enduring.

The billboard lampoons Trump using a medium more common for advertisements about lite beer and HVAC companies. And the people who designed and erected it say it will glare out over the streets of Phoenix for at least as long as Trump is president.

Trump stares out from the billboard and is flanked by mushroom clouds and swastika-style dollar signs. It’s a not-so-subtle dig at where Karen Fiorito, the artist who created the image, sees the country going if the president is left unchecked.

“And if we don’t do something … then the powers that be will just continue on this path toward total annihilation.”

There are more digs at Trump in the details, which the people on the north side of Phoenix will certainly have ample time to examine. The mushroom clouds are in the shape of laughing clowns. And Trump is wearing a flag pin on his lapel – but it’s a Russian flag.

The anti-Trump message was commissioned by La Melgosa, a Phoenix gallery that owns the billboard and has commissioned artwork on it before, Fiorito said. It is on a business-filled street that leads to Phoenix’s downtown.

Fiorito says she’s used billboards to tackle other political topics in the past: one that criticized President George W. Bush in 2004 and an anti-Fox News billboard a year later. She has also launched billboards about the California drought.

“For me as an artist, billboards are the best platform you can have to get your message out to as many diverse people as possible,” she said. “You’re talking directly to the public. You’re not showing in a gallery – you’re going out to reach every Joe Schmoe.”

Billboard artists have used similar methods to reach the masses since the 2016 campaign. A pro-Trump billboard in Russia, showing Trump next to Russian President Vladimir Putin, says, “Let’s make the world great again – together!” Then there was the billboard on Interstate 94 in Detroit, which was a string of words in Arabic, followed by Trump’s name in English. The translation: “Donald Trump, he can’t read this, but he is afraid of it.” The creators told The Washington Post it was a dig at Trump’s anti-Islamic remarks.

Reactions to Fiorito’s billboard have varied. Some people are upset that they have to see Trump’s face every day for at least four years. Another neighbor said poking fun at the president was disrespectful.

“I thought swastikas are very crude and violent,” neighbor Jeff Whiteman told Phoenix CBS affiliate KPHO. “We have a leader of our country and we should respect him whether we agree with him or not.”

On Sunday, two days after the billboard went up, Fiorito posted on Facebook saying Trump supporters “keep calling me every five minutes, leaving harassing messages, sending threatening emails, and trying to hack all of my accounts (Facebook, Gmail, etc).

“But that wasn’t enough so now (they) are signing me up for things online … for donations of clothing and weird s– like that. Who knew they were so thin-skinned?”

Fiorito said many of the critics likely didn’t realize what was on the other side of the billboard: the word “unity,” spelled out in sign language.