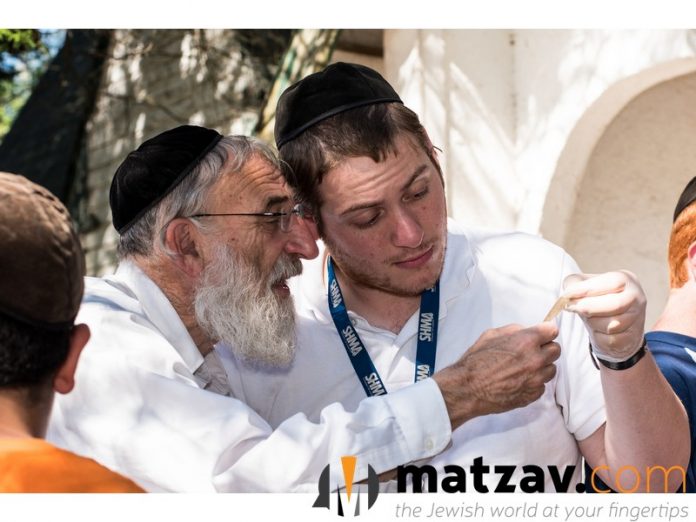 On a recent morning, something happened in Camp Mogen Avraham that has not happened since its inception 56 years ago.

Two weeks ago, in a terrible accident, the doors to the ארון קודש in the Junior Shul broke open, and a ספר תורהfell out to the shock of all present. The campers, staff, and הנהלה were very shaken by the incident. That very night, Rabbi Zalman Stern (the learning director), Rabbi Binyamin Krausz (the camp Rav), and Rabbi Elimelech Chanales (the program director), reached out to Rabbi Herschel Welcher, שליט”א, Rav of Kehillas Ahavas Yisroel in Queens, to discuss what a proper דעת תורה response was. One of the עצות that were discussed was to be מחזק the כבוד of תורהand ספרים by everyone in camp. 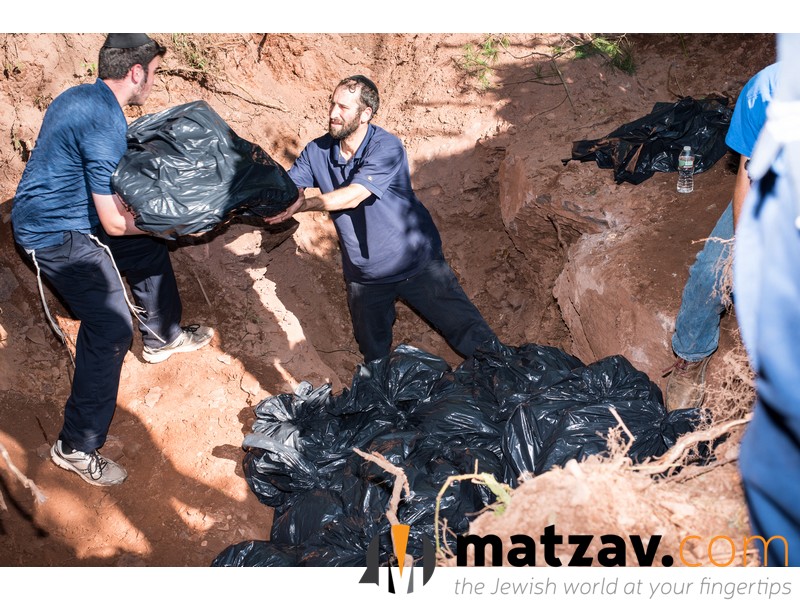 There had been a project to bury שמות going on for a little while, headed by Rabbi Yaakov Meltzer, and the decision was made to complete it in a very מהודר way the very next day. Thus, on Sunday afternoon, the entire Marom division, with all the learning rebbeim and staff, as well as many administration members, went through over 100 large bags of שמות, piece by piece, to ensure that the מזוזות and תפילין were separated from the other שמות. That very same day, a tremendous hole was dug, and the שמות bags were laid in, piece by piece. Rabbi Eli Katz, who was on the digging site, kissed each and every bag before laying it in. The next day, one of the learning rebbeim took his תלמידיםto the site to mark it. They surrounded it with branches, and plans are being discussed to beautify the site.

Fast forward two weeks. In an unprecedented move in the camp’s history, instead of going to learning groups this morning, the entire camp gathered in the main Shul to be addressed by Rabbi Welcher, שליט”א. Last Thursday and Friday, some campers had helped the learning rebbeim compile a list of שאלות that were relevant to the כבוד of ספרים, and the Rav was coming, amongst other things, to discuss these שאלות. 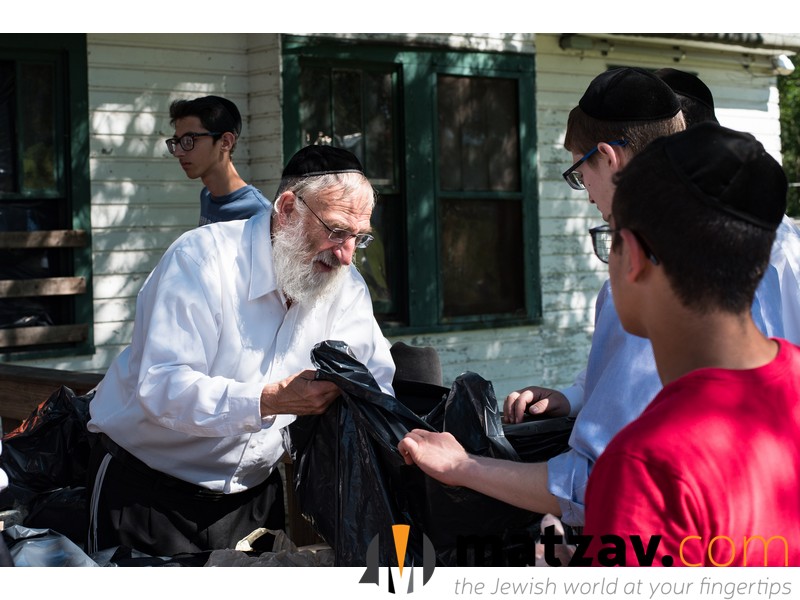 The very fact that this was taking place during learning groups sent a very clear and direct message regarding the primacy of כבוד התורה which made an impression on every camper and staff member.

The Rav was brought into the Shul by Rabbi Stern. He shook hands with Rabbis Krausz and Chanales, and all of the learning Rebbeim. After a short introduction, he took the podium. All eyes were on him as he began speaking.
He opened his remarks with the reason he was there, telling the camp that when something of this sort happens, it is the responsibility of all whom it affects to strengthen their commitment to כבוד התורה.

He related a story that during the Holocaust there were groups of people who were being smuggled through Yugoslavia to ארץ ישראל. Sunday was the safest day to smuggle people in, because many of the police officers were off-duty. Because of this, people had to take a train on שבת to arrive Sunday morning in Yugoslavia order to be smuggled. The פסק they got was that since it was פיקוח נפשות, they were allowed to be מחלל שבת. However, since they had to be מחלל שבת, they should be מקבל upon themselves a way of enhancing כבוד שבת for the rest of their lives. Here as well, although no one was to blame for what happened, everyone should be מקבל on themselves to strengthen כבוד התורה.

He then explained that nowadays, when we have a plethora of ספרים, and we are so used to seeing ספרי תורה, it is easy for בני תורה to lose their feel for their preciousness and the need to treat them with respect.
He continued by saying that this is even more true with תפילין, one of the few objects with a high level of קדושה that we handle on a daily basis. There is a tendency to lose the reverence that we should have for them, and that we must fight this by strengthening our respect for them. He related a story about the אור החיים’s tefillin which underscored the importance of refraining from talking while wearing tefillin. The Rav explained that we should view the wearing of tefillin as charging us with ruchnios for the day, just as, להבדיל, one charges his phone overnight.
He then discussed many שאלות regarding putting things on top of תפילין, תפילין bags, and boxes. He discussed how to properly dispose of photocopied pages of תורה, and the need to ensure that they don’t end up all over the floor. He discussed the הלכות of placing things on top of sefarim, as well as sitting on a bench with ספרים on it.
He then told everyone that when the ספר תורה is taken out in shul, it is very important to show the proper כבוד. He said: “We’ve all been to shuls for many years. How many shuls, when the ספר תורה is taken out, is the atmosphere in shul one that we would want if Rav Chaim Kanievsky, שליט”א would be visiting?”
He advised taking care not to talk even between עליות, even though the ערוך השולחן is מתיר it.
He concluded by discussing the ענין of כבוד בית הכנסת. He said that it is very important for a shul to be clean and to look beautiful, because that enhances everyone’s appreciation for davening. He explained that before the advent of high-rise buildings, they were מקפיד that the shul be the highest building in the city (based on a גמ’ in שבת.) Picking things up or straightening things out in a shul or בית המדרש is a tremendous מצוה. 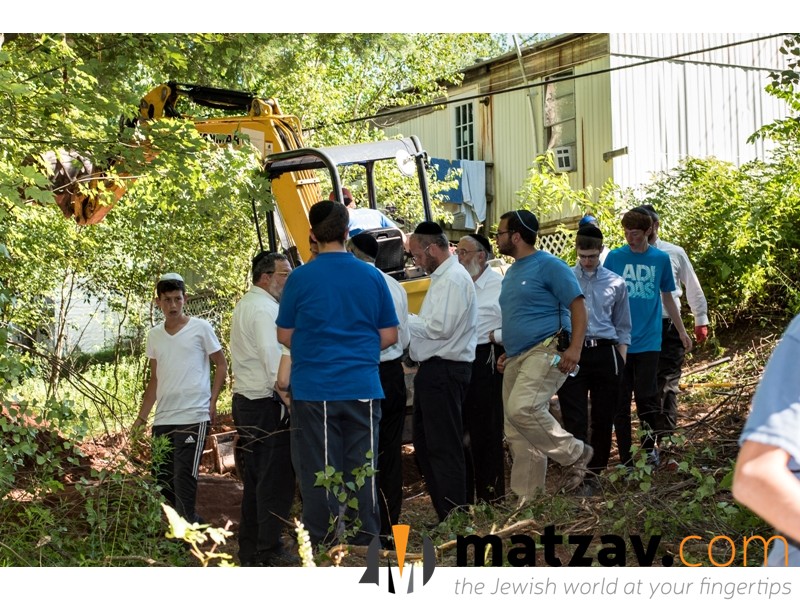 The Rav concluded by expounding on an idea expressed by Harav Matisyahu Solomon, שליט”א;  During גזירות ת”ח ות”ט, the תוס’ יו”ט had a dream which explained that the גזרות had happened because of talking during davening. This led him to write a special “מי שברך” for those who don’t talk during תפילה. Rav Matisyahu Solomon שליט”א explained that the intent of this is not that the גזירות were a punishment for talking. Rather, the intent was that the תפילות could not protect them from the גזרות, because their תפילות were not treated with respect. Rabbi Welcher expanded this idea by saying that if one wants to tap into the awesome זכות of תלמוד תורה, he should be careful with כבוד התורה. He then gave a ברכה to all those present that they be זוכה to all the ברכות of תורה and תפילה.

Every camper then had the privilege of shaking hands with the Rav, and he was escorted to the entrance of camp by Rav Zalman Stern and Rabbi Elimelech Chanales. As he was leaving, he was surrounded by people who wanted to ask him various שאלות. This, too, was a wonderful sight – the desire of everyone to clarify things in הלכה that were troubling them, and the respect accorded to the rav in his being surrounded by people who wanted to hear what he was saying.

All present received a tremendous חיזוק in the importance of כבוד התורה. It was a very inspiring and honorable experience for all, and will hopefully bear פירות for many years to come. As a result of this morning’s events, all the campers and staff have accepted on themselves to do something – not just during the summer, but throughout the year as well – to increase their appreciation of כבוד התורה.