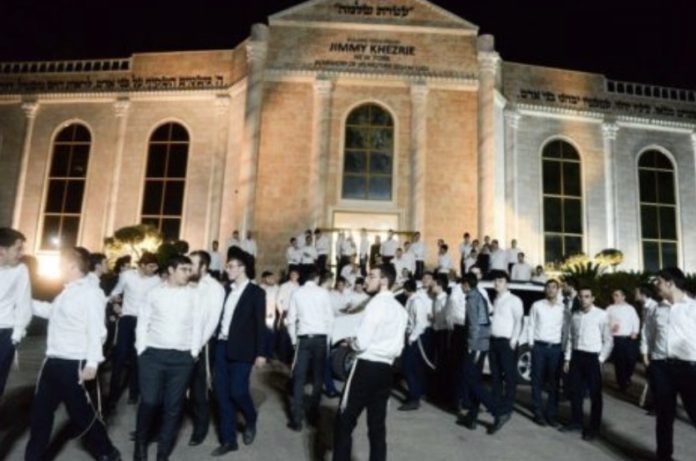 The gathering marked the end of shivah following Rav Dovid’s petirah, which plunged the Olam HaTorah into mourning.

The first to speak was Rav Dovid’s bnrother-in-law, Hagaon Rav Moshe Shternbuch. Rav Shternbuch described Rav Dovid as a model of clarity and hasmadah in Torah, of enthusiasm for limud haTorah, and of yiras cheit, tangible fear of aveiros. Rav Dovid was a prototype of palpable emunah to the extent that there was virtually no tefillah during which he didn’t shed tears.

Rav Dovid was a connection to Brisk of Lita, to his father, the Brisker Rov, as well as to Rav Chaim Soloveitchik and the Bais Halevi, right up to Rav Chaim Volozhiner and the Vilna Gaon.

Rav Shternbuch encouraged the bnei Torah of the yeshiva to use the petirah of Rav Dovid as an impetus for greater commitment to limud haTorah, especially over Erev Shabbos and Shabbos Kodesh each week.

The next speaker was Hagaon Rav Binyomin Sorotzkin, a talmid of Rav Dovid and a rosh yeshiva at Ateres Shlomo.

Rav Sorotzkin quoted the Gemara which describes the petirah of Rabbeinu Hakadosh as “nitzchu areilim es hametzukim venishbah aron hakodesh – The angels triumphed over the righteous, and the Sacred Ark was captured.” What, asked Rav Sorotzkin, was the tangible loss of the capture of the Aron Hakodesh, which lay in the Kodesh Hakodoshim and could not be accessed?

The atzeres concluded with divrei hesped from Hagaon Rav Boruch Mordechai Ezrachi, rosh yeshiva of Yeshiva Ateres Yisroel, who described the magnitude of the loss of Rav Dovid and how it impacts the greater Torah world. With Rav Dovid’s passing, 99 years of uninterrupted learning Torah lishmah and harbotzas haTorah and educating generations of talmidim have been taken away from all of us. Every member of Klal Yisroel, whether they knew him or not, is spiritually impoverished as a result, said Rav Ezrachi. Rav Dovid, he said, represented pure mesoras haTorah, and we are not bereft of that. Rav Ezrachi stressed that there is a responsibility on one and all to carry on the legacy of Rav Dovid in any way one can.