[Audio below.] Yehuda Green’s long awaited second album, Yearning, is finally in stores. The ever popular singer, whose first album was a bestseller, has followed the style of Reb Shlomo Carlebach with his own twist, a combination that has made him a sought after singer and baal tefillah all over the world. 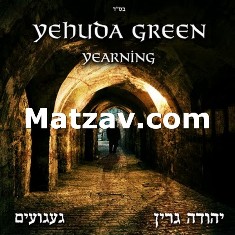 A humble and shy person by nature, Yehudah has expressed his gratitude to the Ribono Shel Olam for his hatzlacha. His own composition, Nishmas, continues to be a hit, and has been rerecorded several times by various singers since it was first released.

The album features 12 tracks, including 4 brand new songs, with compositions by Yehuda himself. There are also 8 songs from Reb Shlomo Carlebach, including some rare niggunim.

The album is distributed by Aderet Music.

Click below for an audio sampler of the album: