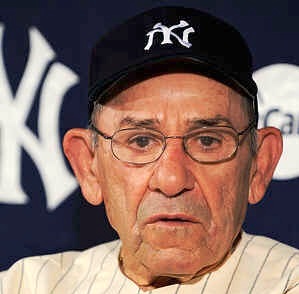 New York Yankees catcher and baseball icon Yogi Berra died Tuesday at age 90. Despite his open demeanor and belitted physical appearance, Berra was a prolific winner “whose intellect was a target of humor if not outright derision,” The New York Times writes.
Berra’s “Yogisms” are indelible, such as “When you come to a fork in the road, take it” and “It’s deja vu all over again!”
As a player, manager, and coach, Berra appeared in 21 World Series, winning 13 with the Yankees. He was an 18-time All-Star and three-time American League MVP, batting .285 for his career with 1,430 RBI.
His playing career was interrupted by World War II when he joined the Navy; in 1944, Berra was wounded in Europe and recieved a Purple Heart.
After he was done playing, Berra brought an ailing, aging Yankees team all the way to Game 7 of the World Series in 1964 and then helped the New York Mets win the World Series as first-base coach in 1969.
View Yogi Berra’s Life in Pictures HERE.