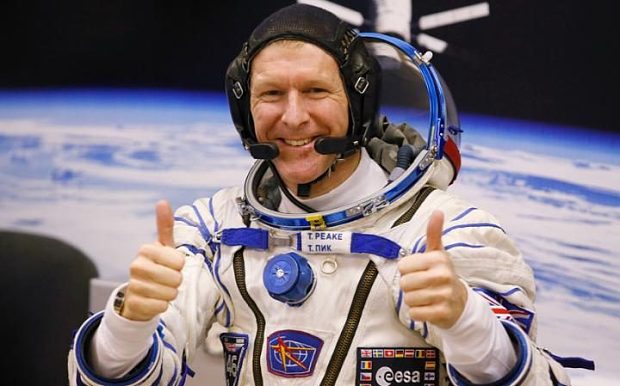 Tim Peake’s historic, six-month stay in space came to an end today when he and two other astronauts landed safely in Kazakhstan.

The last time an astronaut flew to space under the United Kingdom’s banner was Helen Sharman in 1991, according to the BBC. Peake is the first British astronaut to have completed a spacewalk and the first man to have run a marathon in space, nine years after a woman did.

“It was incredible,” Peake told reporters after landing. “Best ride I’ve been on, ever.”

Peake said he was “truly elated” to be back home. “The smells of Earth are just so strong. It’s wonderful to be back to fresh air,” he said.

The three-hour return trip via the Soyuz spacecraft also included NASA astronaut Tim Kopra and Russian cosmonaut Yuri Malenchenko. And it wasn’t an easy ride back; temperatures outside the capsule on reentry reached 2,910 degrees Fahrenheit, according to the Guardian.

Returning to earth on the Soyuz capsule has a bit of a reputation as a volatile experience, the Guardian reported.

“It is physically extremely violent,” retired Canadian astronaut Chris Hadfield told the Guardian. “We often describe it as 15 explosions followed by a car crash.”

Peake, 44, is a former helicopter test pilot. In 2009, he was chosen from a pool of 8,000 applicants to join the European Space Agency’s training program, the BBC reported.

Peake’s first trip to space lasted 186 days. A month after his launch, he conducted a spacewalk to help replace a failed voltage regulator in order to restore an International Space Station power channel.

He also participated in more than 250 experiments, according to the Guardian, including some on himself. The space station airlock was used to study Peake’s lungs, and his sleeping patterns were monitored in order to learn more about how humans adapt to the absence of normal daylight.

And while humans on Earth ran the 2016 London Marathon, Peake jogged along in space. He ran 26.2 miles on a treadmill in three hours, 35 minutes and 21 seconds.

Peake became the first person to be honored by a British royal while in space: Queen Elizabeth II recognized him for “extraordinary service beyond our planet” in giving the companion of the order of St. Michael and St. George. It’s an honor typically bestowed for distinguished overseas service.

The British astronaut will receive medical evaluations at ESA’s base in Cologne, Germany, according to ESA. Researchers will also collect data to see how Peake’s mind and body adapted to his time in space.

“It’s a life-changing experience,” Peake told reporters. “It’s overwhelming, really, to be up there for six months and to see everything.”

While he said he couldn’t wait to see his family and eat pizza, he added, “I’m going to miss the view, definitely.”

He tweeted, “Time to put on some weight! What an incredible journey it has been- thank you for following & see you back on Earth!”