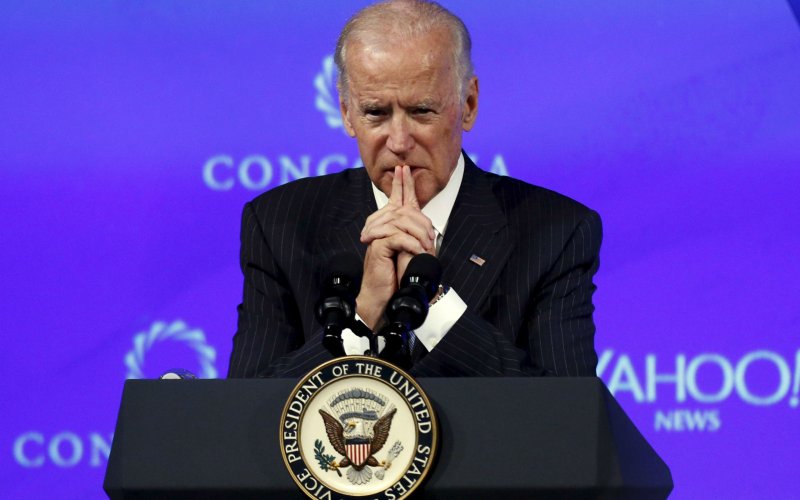 When President Obama was elected to his first term, the liberal advocacy group J Street was in its infancy, barely a year old.

Seven years later, the self- defined “pro-Israel, pro-peace” organization has earned the gratitude of the administration for its support of the Iran nuclear deal and its lobbying for a two-state solution to the conflict between Israelis and Palestinians.

Their appearance before a group that has frequently criticized Israeli government policies underscored the administration’s belief that political discourse on Israel can be pointed without undermining support for the Jewish state. Meanwhile, Bernie Sanders earned applause at last week’s Democratic primary debate when he said Israel had a right to defend itself but called its response to terrorist attacks “disproportionate.”

J Street’s president, Jeremy Ben-Ami, said the appearances by Biden and Kerry reflect a broad shift underway, as politicians are expressing a wide range of opinions on the Israeli- Palestinian conflict.

“This is a watershed moment in the political currents that shape American policymaking around Israel and the Middle East,” he said.

Kerry used the forum to defend the Iran deal that was vigorously opposed by Israeli Prime Minister Benjamin Netanyahu. Biden balanced blunt criticism of the Israeli government with vows that the United States will always guarantee Israel’s security.

“We have an overwhelming obligation, notwithstanding our sometimes overwhelming frustration with the Israeli government, to push them as hard as we can toward what they know in their gut is the only ultimate solution, a two-state solution, while at the same time be an absolute guarantor of their security,” Biden said.

Biden called the path to peace “shrouded” and said that when he visited the region last month he came away discouraged at the prospects for peace talks.

“There is at the moment no political will that I observed among Israelis or Palestinians to move forward with serious negotiations,” he said. “The trust that is necessary to take risks for peace is fractured on both sides.”

Biden criticized Palestinian leaders for failing to condemn terrorist acts but also singled out the “steady, systematic expansion” of Israeli settlements on land Palestinians desire for a state as a step in the wrong direction.

“They are moving toward a one-state reality, and that reality is dangerous,” Biden said.

He concluded with a grim warning: “The present course Israel’s on is not one that’s likely to secure its existence as a Jewish, democratic state – and we have to make sure that happens.”

Both Biden and Kerry thanked J Street for its support of the Iran nuclear deal, which was opposed by the Israeli government and the American Israel Public Affairs Committee, a more traditional pro-Israel lobbying group.

Kerry said that despite predictions Iran would get a windfall of as much as $150 billion when its assets were unfrozen under the deal, Iran has received only $3 billion since the accord was implemented in January.

And Kerry vowed to use the nine months remaining of the Obama administration to continue pursuing negotiations to end the conflict.

“We will continue to try to advance a two-state solution, the only solution,” Kerry said. “Because anything else will not be Jewish, and it will not be democratic.”

Obama has had a famously testy relationship with Netanyahu, even while the administration has provided more military aid to Israel than at any time in U.S. history. White House positions on Israel and the Middle East align more closely with those of J Street than AIPAC, a point Biden stressed when he said the group proves there is no contradiction between being progressive and pro-Israel.

The White House cautioned against reading too much into the presence of Biden and Kerry, the first sitting secretary of state to address the group.

“We certainly appreciate J Street’s support for our initiative to verifiably prevent Iran from obtaining a nuclear weapon,” said National Security Council spokesman Ned Price. “At the same time, however, we interface with other groups that didn’t offer the same support. We’re primarily interested in hearing from a variety of voices on how we can best support our Israeli ally.”

Some polls have shown a generational shift among American Jews in attitudes toward Israeli government policies, though there is no lessening of support for Israel itself.

Lizzie Stein, a 22-year-old student at Occidental College in Los Angeles, is a regional vice president for J Street U, the campus branches of the group.

“Our views aren’t different, but we’ve had different experiences,” said Stein, who was one of eight J Street U student leaders who met with Obama last week. “I was 8 months old when [Israeli Prime Minister Yitzhak] Rabin was shot. All we’ve known is the lost hope of peace.”

Stein said there is a sense of urgency among her peers.

“I’m sick of seeing pro-Palestinian and pro-Israel groups yelling past each other,” she said. “That doesn’t get us anywhere. It doesn’t change the fact we continue to have violence, and Israel would be more secure with defined borders.”