Yes. The city should be better prepared.  No. It was a giant snowstorm – people need to just relax and enjoy a snowday.  Who cares? I got more time off work.

Mayor Bloomberg, scrambling to save his reputation as a first-rate manager after a string of snow-removal snafus left New Yorkers fuming, asked the city today for patience.

“It is a bad situation,” he said. “We are doing everything we can think of, working as hard as we can.”

Traveling to hard-hit Brooklyn, he acknowledged the anger of people whose streets haven’t been plowed or whose lives were threatened by perilous emergency response delays as ambulances sat stuck in snow.

But Bloomberg insisted city workers were doing their best.

“We won’t get to everybody every time,” he said. “Yelling about it and complaining doesn’t help.”

Asked if he had regrets about the way his administration handled the storm, Hizzoner quipped sarcastically, “I regret everything in the world.”

Even some of the Mayor’s top allies are slamming the city’s sluggish response to the unexpected blizzard warning that went out on Christmas afternoon. February’s monster blizzard was handled far better, they said.

“The collective storm response was not anywhere near up to the standards New Yorkers are accustomed to. This is unacceptable,” said City Council Speaker Christine Quinn, who scheduled a Jan. 10 oversight hearing to probe the handling of the storm.

Fifty eight ambulances remained stranded in snowbanks as of this afternoon, down from 100 the day before.

He said 4,700 calls were made to 911 during the blizzard, many of them for “sprains and strains that could have waited.”

“That backlogs the system and it clogs up for the more medically urgent calls,” Cassano said. “This was busier than the (2003) blackout. And in the blackout we were able to get around.”

At the height of the storm, the number of backlogged 911 calls hit a staggering 1,300.

The mayor said his new director of emergency communications, Skip Funk, would conduct a review of 911 dispatch during the storm.

“Where we find room for improvement, we will take immediate action,” he said.

Transport in the city remained a disaster nearly 36 hours after the snow stopped falling.

New York’s airports were open but still a mess, with takeoffs hobbled by deicing requirements and a massive backlog of canceled flights still to work through.

The subways were running but with widespread delays and outages on several lines, including the B, L, N and Q.

The LIRR was running the Babylon, Huntington, Port Washington and Ronkonkoma branches on a holiday schedule, and expects to resume “very limited service” on other lines by the end of the day.

Bus service remains severely snarled. Local and express service in the five boroughs was operating with big delays especially in Southern Brooklyn, Staten Island and Queens, according to the MTA.

“Roadway conditions are being evaluated on a route by route basis. We will only restore service where we can safely do so,” the MTA said.

The storm canceled several blood drives, leading to a serious blood shortage at city hospitals. New Yorkers who can travel and donate blood are asked to call the NY Blood Center at 800-933-2566 or visit www.nybloodcenter.org.

The mayor urged pedestrians to walk with care as melting snow is due to ice up overnight. And he asked motorists to make sure to clear their exhaust pipes of snow when getting back into their cars.

“If it is, your car can fill up with carbon monoxide, which is toxic and we just don’t need more deaths,” he said. 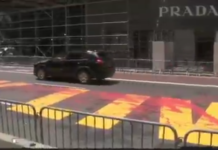