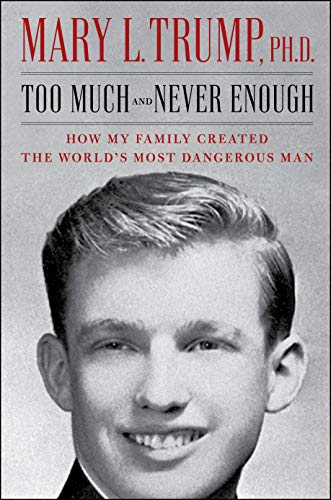 A highly anticipated book by Mary L. Trump, the niece of President Trump, will be published two weeks earlier than planned after a court last week allowed Simon & Schuster to continue distributing copies. The book will be published on July 14 due to intense interest in it, the publisher announced Monday.

While the publisher last week was released from a temporary restraining order, Mary Trump is still under the order and is contesting it. In the meantime, her publisher released the book jacket and a news release that promised a sweeping indictment of the president’s psychological makeup.

“From this explosive book,” the news release said, “we learn how Donald acquired twisted behaviors and values” such as that “cheating is a way of life,” “taking responsibility for your failures is discouraged” and “qualities like empathy, kindness and expertise are punished.” It did not provide specifics, leaving that for the book’s publication.

The back cover of the book, also released Monday, said that “Donald is much as he was at three years old: incapable of growing, learning or evolving.” It says that Donald Trump feared his father’s rejection and “suffered deprivations that would scar him for life.”

The book, “Too Much and Never Enough: How My Family Created the World’s Most Dangerous Man,” has rocketed to the top of bestseller lists based on advance orders after a blizzard of publicity about how Mary Trump would provide an insider account of the family that shaped the man who became president.

Much of the publicity material released Monday has appeared in the original posting on sites such as Amazon.com, including the allegation that Donald Trump “dismissed and derided” his father, Fred Trump Sr., when the elder Trump had Alzheimer’s disease.

President Trump has told Axios that the allegation was untrue and he said that his niece was not allowed to write the book because she signed a confidentiality agreement in 2001 following an inheritance settlement.

“It’s totally false; the opposite,” Trump said about the allegation regarding his father’s disease. “Actually, the opposite. I always had a great relationship. I didn’t know that she said that. That’s a disgraceful thing to say.”

The White House did not respond immediately to a request for comment about the news release.

Mary Trump has said in a court filing that she is not bound by the confidentiality agreement because Donald and his siblings misled her about the value of family holdings.

Mary Trump, 55, is a clinical psychologist, giving her a professional background that the publisher says provides her with a unique perspective to analyze her uncle.

President Trump’s younger brother, Robert, recently filed a petition in New York Supreme Court seeking to stop publication on grounds that Mary Trump had agreed not to publish an account of the family. But the court’s appellate division ruled last week that the publisher, Simon & Schuster, was not a party to that agreement and lifted a temporary restraining order against it.