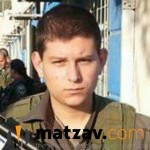 Border Policeman Benjamin Yaakovovich, 19, who was critically wounded in a terror attack north of Chevron, has succumbed to his wounds on Sunday evening. His parents decided to donate his organs to save the lives of others, Ynet reports.

The Border Policeman was critically wounded in a vehicular attack on Highway 60 near Halhul on Wednesday afternoon and has been fighting for his life since at Hadassah Medical Center in Jerusalem’s Ein Karem.

“Staff Seargent Benjamin Yaakovovich Z”L drafted into the Border Police a year and a half ago, and is survived by his parents, brother, and two sisters,” a police statement said.