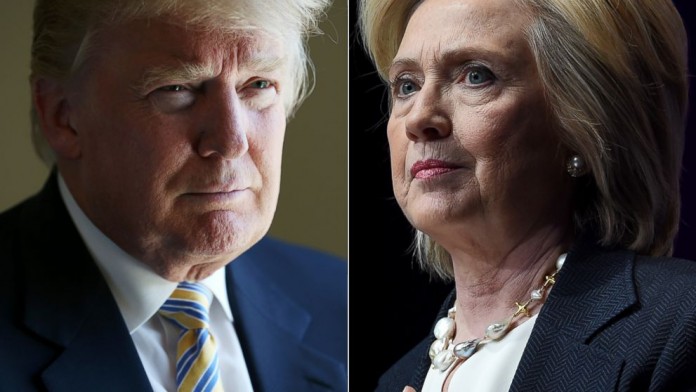 Donald Trump and Hillary Clinton, the front-runners in their parties’ presidential nominating contests, have found themselves on the defensive in Wisconsin, where Tuesday’s primaries could deliver embarrassing setbacks and further unsettle both races.

A loss for Trump in particular could reset a Republican contest that has been dominated by his outsider candidacy and outsized media presence. Amid scrutiny following several high-profile stumbles, state polls show Trump in a tight race with Sen. Ted Cruz of Texas, prompting speculation about whether Wisconsin could mark the beginning of the high-flying candidate’s downfall.

Those polls show Clinton in a similarly tight race with Sen. Bernie Sanders, the democratic socialist from Vermont whose populist, anti-Wall Street message has transformed what was expected to be an easy nomination race for Clinton into a long and arduous slog.

Winning Wisconsin, the only state to vote this week, would give Sanders a fresh dose of momentum – and perhaps new credibility for his claim that he has a chance to catch Clinton in the delegate count and win the Democratic nomination.

Both Trump and Clinton maintain they can still win in Wisconsin. But on the Democratic side, Sanders’s unexpected staying power has unnerved some of Clinton’s supporters. In a memo sent out to backers Monday evening, Clinton campaign manager Robby Mook sounded aggravated.

“Hillary Clinton has built a nearly insurmountable lead among both delegates and actual voters,” he wrote. “Contrary to the claims of the Sanders campaign, in measure after measure, Clinton has shown the broadest support of any candidate currently running for president. We know that the misleading spin will continue, but we wanted you to know the facts about the real state of the Democratic primary.”

Mook said Sanders would have to win by overwhelming margins the four biggest delegate prizes left, including her home state of New York, to erase Clinton’s big lead. He did not mention Wisconsin.

The Clinton campaign also sent out a fundraising email Monday.

“We’re down in almost every poll in Wisconsin – tomorrow’s primary is going to be a tough fight,” the request said, noting Sanders has out-raised her for three months running.

“This nomination isn’t locked up yet, and we’ve got to keep fighting for every vote.”

Trump stumbled badly during the run-up to Wisconsin, with a gaffe over abortion in which he stated, and then retracted, that women who seek abortions should be punished, and with comments on foreign policy that led President Barack Obama to say that the businessman knows little about the world.

Partly as a result, the Wisconsin race has emerged as a key moment in the Republican nomination, exposing weaknesses for Trump in an industrial state with a large working class – demographics that have favored him in other states. A Marquette Law School poll released last week showed Cruz surging to 40 percent support among likely GOP voters, up from 19 percent in a February poll. Trump’s support remained steady at 30 percent.

Trump has refused to concede that polls showing him trailing Cruz are accurate even while acknowledging that a string of controversies may have cost him votes. And he has dismissed speculation about a possible break in his momentum by pointing to his strengths in New York – his home state, which holds its primary on April 19 – and in the string of Eastern states that vote later this month.

“I’ve been given the last rights how many times, like 10? Every week, it’s the end of Trump,” the billionaire said during a campaign rally in Superior, Wisconsin. “Then they walk in, ‘Sir, I don’t know what happened but your poll numbers just went through the roof.'”

Anti-Trump Republicans, who have poured millions of dollars into attack ads around the country, are hopeful that a loss in Wisconsin will signal a break in the momentum that has kept Trump steadily rising in the polls. A loss in Wisconsin, they believe, will increase the likelihood of a contested Republican convention in July – a strategy that rests on keeping him from crossing the requisite 1,237-delegate threshold he needs to clinch the nomination outright.

In a private document that was circulated over the weekend and obtained by The Washington Post, Trump campaign senior adviser Barry Bennett revealed the mounting frustrations among the billionaire’s top aides as they closed what had been a tumultuous week.

Entitled “Digging through the Bull (expletive),” Bennett’s memo urged Trump campaign manager Corey Lewandowski – who was charged with battery last week for allegedly yanking a reporter – and others to ignore critics who have questioned whether Trump’s campaign for the Republican presidential nomination has waned.

“America is sick of them. Their idiotic attacks just remind voters why they hate the Washington Establishment,” Bennett wrote, citing tracking poll data favorable to Trump.

“Donald Trump 1,” Bennett declared, as if he was scoring the past week. “Washington Establishment/Media 0.”

Clinton campaigned fewer days and before smaller crowds in Wisconsin than Sanders, and turned much of her attention ahead to the larger stakes in New York. She did not mention the Wisconsin race during a rally Monday in Manhattan to cheer the state’s approval of a $15 minimum wage.

On the eve of the primary, Sanders touted his long-standing support for labor unions and his opposition to a series of “disastrous trade deals,” setting a contrast with Clinton that he’s pressed in other industrial, midwestern states.

The senator from Vermont began his day in Janesville, where General Motors shuttered a manufacturing plant in 2008 and moved operations to Mexico, costing the community 2,800 jobs, Sanders said.

“I am not a candidate who goes to the unions, goes to workers, then leaves and goes to a fundraiser on Wall Street,” he said, taking a jab at Clinton and her ties to the financial sector.

Clinton has also been critical of Sanders’s posture on trade while campaigning in Wisconsin.

At a Democratic dinner in Milwaukee on Saturday, she said Sanders seems to pride himself on having “opposed all trade deals, all the time.”

Recent polls have showed Sanders with a modest lead over Clinton in Wisconsin, and he told supporters Monday that he thinks he will win the state if there is a large voter turnout.

The Clinton campaign has been telegraphing a potential loss in Wisconsin for months.

Clinton campaigned once in Madison – a liberal-rich part of the state heavy with college students that is expected to be a stronghold for Sanders. But that speech focused on the Supreme Court nomination fight and was aimed toward national media.

She has also pushed to increase turnout among her own base of voters, African-Americans, whose support could boost her significantly in Milwaukee.

Recent contentious fights between Wisconsin’s Republican governor Scott Walker and public employee unions have also served as grist for Clinton’s argument that she, and not Sanders, will support state parties to fight against Republicans at the state and local levels.

Walker has also loomed large in the Republican race, because of his vehement opposition to Trump.

Trump has taken an unconventional – and somewhat mystifying – approach in Wisconsin, repeatedly attacking Walker despite the governor’s 80 percent approval rating among Republicans. Trump has mocked Walker’s obsession with Harley-Davidson motorcycles and has sought to undermine his record in the state, which Trump has repeatedly told Wisconsin voters is “middle of the pack” compared to its neighboring states.

Trump has also kept alive a feud with influential conservative talk-radio host Charlie Sykes, an avowed anti-Trump conservative who last Monday hammered the billionaire in a heated radio interview. Over the weekend, Trump called Sykes a “whack job” and a “low life.”

The third Republican still in the race, Ohio Gov. John Kasich, is far behind his two rivals in recent Wisconsin polls. He spent Monday campaigning in New York in advance of that state’s primary in two weeks.

Trump has swept across the state in recent days, flying back and forth between western and eastern Wisconsin several times over the weekend. On Monday afternoon, Trump held campaign events in La Crosse, along the Mississippi River to the west, and Superior, in the far north. On Monday evening he was to fly back to southeastern Wisconsin to host a rally in Milwaukee.

Despite Trump’s advantage among working-class voters in other states, polling shows that Cruz does better among voters without college degrees. Cruz has also surged within shooting distance of Trump in the northwestern part of the state, which earlier had been a stronghold for Trump.