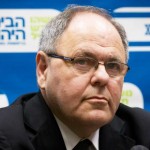 A video has surfaced of a Brazilian lawmaker comparing the new Israeli ambassador to Brazil Dani Dayan to a Nazi leader because of his affiliation with Jewish communities in Judea and Samaria.

“To send a settler leader to represent Israel in Brazil is an insult to our country. We can’t accept such provocation,” Brazilian MP Carlos Marun said in a video in August, Yedioth Ahronoth reported on Sunday.

Marun also said he has no problem with the existence of Israel but referred to settlers as “agents of Zionism that the world can’t accept. They are thieves of others’ land. In what is an insult to Brazil, an insult to the government, and an insult to millions of Brazilians whose origins, like mine, are from the Arab world — Israel chooses to send the leader of these settlers to represent it in our land.”

Prior to his pending appointment, Dayan served as head of the Yesha Council, an umbrella organization of Jewish communities in Judea and Samaria.

A Brazilian official hopes Israel will get the hint that they have rejected Dayan’s nomination after months of silence.