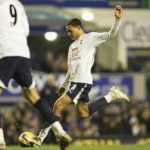 British-Jewish business tycoon Lord Alan Sugar joked on Wednesday that London synagogues will likely be empty during Yom Kippur with congregants fleeing to watch the match-up of two leading English soccer teams known for having hordes of Jewish fans.

“Spurs V Arsenal cup game drawn on most important Jewish festival,” Lord Sugar pointed out on Twitter. “Both teams have loads of Jewish fans. Conclusion Synagogues will be empty.”

North London rivals Tottenham Hotspur and Arsenal FC will go head-to-head in the Capital One Cup third-round draw on Sept. 23rd, the same day as the holiest day in the Jewish calendar. The match is set to begin at 7:45 p.m., just two minutes before the end of the traditional fast.

Both British Premier League soccer clubs have gained a reputation for attracting Jewish followers. North London’s Tottenham is a historically Jewish neighborhood and many of the club’s fans controversially refer to themselves at the “Yids,” The Algemeiner previously reported.

It will be the third time in 10 years that the teams will face each other in the competition, according to the U.K. Daily Mail. Arsenal won a semi-final match in 2007 and the Spurs were victorious at the same stage in 2008. In 2010-11, Arsenal beat the Spurs 4-1 after extra time in the third round.