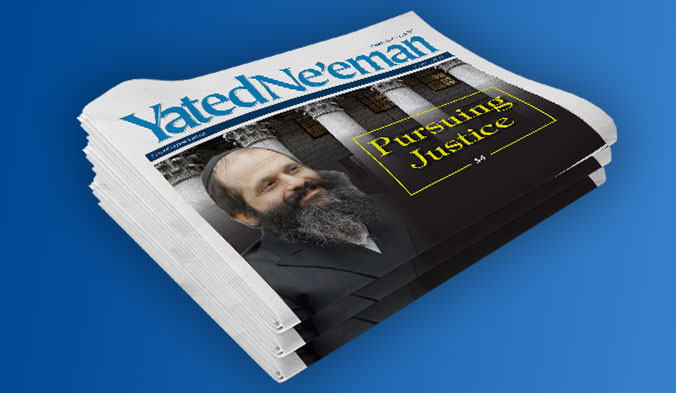 Today, President Donald Trump commuted the prison sentence of Sholom Mordechai ben Rivka Rubashkin, as reported earlier on Matzav.com. Reb Sholom Mordechai, a 57-year-old father of 10 children, previously ran the Iowa headquarters of his family business that was the country’s largest kosher meat-processing company. In 2009, he was convicted of bank fraud and sentenced thereafter to 27 years in prison. The former CEO of Agriprocessors in Postville, Iowa, served more than 8 years of that sentence, which many called grossly excessive in light of its disparity with sentences imposed for similar crimes.

Trump’s action is not a presidential pardon; it does not vacate this conviction and leaves in place a term of supervised release and a substantial restitution obligation.

The Rubashkin case, which was closely followed over the last decade here on Matzav.com, started on May 12, 2008, when U.S. Immigration and Customs Enforcement agents raided the Agriprocessors plant and arrested hundreds of the firm’s workers, undocumented immigrants, leading the company to file for bankruptcy several months later.

Shortly thereafter, Sholom Mordechai was arrested by federal officials and charged with fraud in the U.S. District Court for shifting money that should have been deposited as collateral for a loan from First Bank in St. Louis.

Although Mr. Rubashkin was convicted, he did not intend to cause any loss to the bank, but the federal prosecutors who charged him wanted to extract a pound of flesh, and then some – even at the cost of illegally overstepping their bounds and interfering in the bankrupt company’s sale, contended Charles Renfrew and James Reynolds, writing in the Wall Street Journal. Renfrew was a U.S. District Court judge in the Northern District of California (1972-80) and U.S. deputy attorney general (1980-81), and Reynolds was the U.S. attorney for the Northern District of Iowa (1976-82).

The sentence was more than twice as long as he would have served had his punishment fit his alleged crime.

Evidence that the prosecutors hid and that Rubashkin attorneys found over the past few years proved that the prosecutors stymied the bankruptcy trustee from making a sale to prospective buyers at a reasonable price, instead warning that buyers would forfeit the business if any member of the Rubashkin family maintained a connection to the firm.

As reported by Matzav.com, nine prospective bidders – including one offer of $40 million – subsequently walked away from the sale and Agriprocessors was sold for a mere $8.5 million, ensuring that the bank would not get back the money it was owed.

A bank fraud offender’s sentence is linked to the loss incurred by the bank. In Rubashkin’s case, due to the prosecutors’ meddling, the loss was $27 million, allowing the prosecutors to request a life sentence. This was later lowered to 27 years in prison.

After the 2010 conviction, but prior to sentencing, a bipartisan group of six former attorneys general and over a dozen other prominent legal experts wrote a letter to the judge asking her to show leniency. This call, publicized by Matzav.com and others, grew into a clamor in the last seven years. A bipartisan group of four former U.S. attorneys general, two former FBI directors and dozens of law professors and former Justice Department officials wrote to the current U.S. Attorney for the Northern District of Iowa, Kevin Techau, describing the sentence as “patently unjust” and asking him to address what the letter called “shocking new evidence that prosecutors in your office knowingly presented false and misleading testimony at the sentencing hearing.”

Rabbi Pinchos Lipschutz, editor and publisher of Yated Ne’eman, who spearheaded the campaign to gain the freedom of Shalom Mordechai Rubashkin, commented on the news of his freedom this afternoon.

“Ten years ago, we started on this lonely campaign, with only Hashem on our side,” Rabbi Lipschutz told Matzav.com. “Boruch Hashem, we were zoche to see the yeshuah, the neis of Zos Chanukah, and the freedom of Shalom Mordechai that all of Klal Yisroel was waiting for. We thank President Trump for granting this beloved father and husband, and friend to so many people, his freedom, and we look forward to greeting Shalom Mordechai shortly.”

California attorney Gary Apfel was an erstwhile advocate for Rubashkin and the head of his legal team, and had long ago highlighted just how great an injustice had been perpetrated. His efforts, buttressed by some others, ultimately paid off, leading to today’s commutation of the Rubashkin sentence.