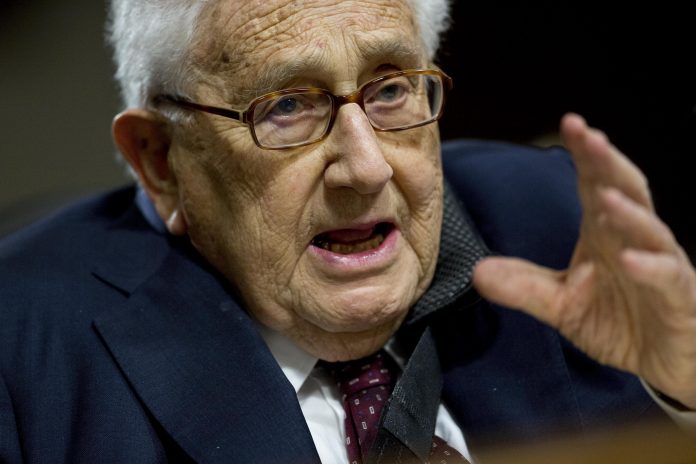 As he’s done for decades, Henry Kissinger is again shuttling between the U.S. and China to defuse tensions, this time as President Xi Jinping tries to figure out how much of President-elect Donald Trump’s China-bashing will follow him to the White House.

While little about Kissinger’s closed-door talks has been disclosed, Chinese officials are trying to assess whether the incoming administration will prompt greater confrontation over trade and territory disputes, as Trump promised on the campaign trail.

“We are now in a key moment. We on the Chinese side are watching the situation very closely,” Xi said Friday, as he welcomed the retired diplomat at the Great Hall of the People in Beijing. “Dr. Kissinger, I am all ears to what you have to say about the current world situation and the future growth of China-U.S. relations.”

Kissinger thanked Xi and Chinese officials for explaining “the nature of your thinking and the purposes of your long-range policy.”

“It’s important for China and the U.S., with minimal mutual trust, to have an unofficial conduit to expand mutual interests and avoid miscalculation,” said Gao Zhikai, an interpreter to China’s late paramount leader Deng Xiaoping who has met frequently with Kissinger over the years. “Kissinger has a unique position in the relationship between the two major powers as a messenger.”

Whereas former Secretary of State Hillary Clinton was a known quantity to China, Trump lacks a public service record for the country to evaluate. While campaigning, the Republican accused China of “raping” America of jobs, while vowing to levy tariffs on Beijing and label it a currency manipulator. He’s also pledged to add scores of ships to the U.S. Navy, which China could view as destabilizing should they end up in the Pacific, where the two sides have sparred over navigation rights.

Chinese leaders were expected to clarify their stance on major issues with Kissinger, with Xi telling Trump in a telephone call Nov. 14 that cooperation was the only correct choice for relations. The former secretary of state had several phone conversations with Trump before a face-to-face session in New York on Nov. 18.

Afterwards, Kissinger told CNN’s Fareed Zakaria that people “should not insist in nailing him to positions that he had taken in the campaign on which he doesn’t insist.”

“This president-elect, it’s the most unique that I’ve experienced in one respect: He has absolutely no baggage,” Kissinger said. “He has no obligation to any particular group because he has become a president on the basis of his own strategy and a program he put before the American public that his competitors did not present. So, that is a unique situation.”

Kissinger, who published his history “On China” in 2011, has visited the country more than 80 times since a clandestine 1971 trip to pave the way for restored relations, meeting every Chinese leader since Mao Zedong, according Xinhua. State media heap praise on him during each visit, describing him as an “old friend of Chinese people.”

Kissinger was among select U.S. experts — including former Treasury Secretary Hank Paulson and Elaine Chao, Trump’s nominee for transportation secretary — whom Xi met in February 2012 before taking power. The group advised Xi that frequent communication with his U.S. counterpart was more important than repeat formal visits, according to a person familiar with the meeting who asked not to be identified because the talks were private.

“The U.S. and China are going to have to establish some channels, but that is going to take time,” said Tim Summers, a Hong Kong-based senior consulting fellow for Chatham House. Summers said that Xi, unlike Japanese Prime Minister Shinzo Abe, “is not going drop into Trump Tower en route somewhere else. So, we are in for a period of U.S.-china uncertainty, along with all the other issues up in the air at the moment.”

China’s continued reliance on the aging ex-diplomat as an interlocutor shows that Communist Party leaders haven’t yet found a substitute.

“No one could replace him,” Gao said. “No other Americans could get the same respect from the Chinese leaders or have as honest exchanges with Chinese leaders.”