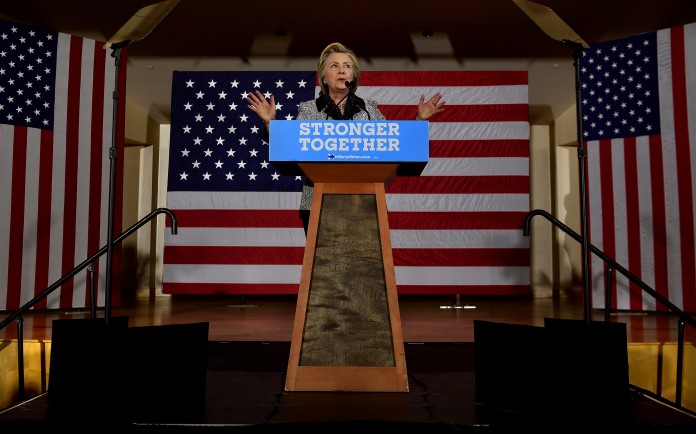 Hillary Clinton said Monday that she knows many voters have doubts and suspicions about her, something she said bothers her but which is understandable after “25 years of wild accusations” against her.

“Trust is the glue that holds our democracy together,” Clinton said, adding that she is concerned that Americans’ trust in government and institutions has declined.

“I take this seriously, as someone who is asking for your votes, and I personally know I have work to do on this point,” said Clinton, the Democratic presumptive presidential nominee. “A lot of people tell pollsters they don’t trust me. I don’t like hearing that, and I’ve thought a lot about what’s behind it.”

The remarks came as Clinton used her first address to a large black audience since becoming the Democratic presumptive nominee to renew a pledge to seek gun control in Congress, despite a long history of inaction.

“I don’t know about you, but I think saving our children from gun violence is a civil rights issue,” Clinton told a 50th anniversary gathering of the Rev. Jesse Jackson’s Rainbow PUSH Coalition.

As she has done in the past, Clinton blamed what she called a long smear campaign by her adversaries.

“You know you hear 25 years worth of wild accusations, anyone could start to wonder,” Clinton said. “Political opponents and conspiracy theorists have accused me of every crime in the book,” she said. “None of it’s true, never has been,” but also never goes away, Clinton said.

She added a mea culpa that suggests that she knows the depth of the trust problem that has dogged her throughout this campaign. The doubts many voters express were made worse by questions over her decision as secretary of state to use a private email system that was only revealed after she left office.

“And it certainly is true that I’ve made mistakes, I don’t know anyone who hasn’t,” Clinton said. “So I understand that people have questions.”

She promised to try to resolve those doubts through hard work and dedication, and held up the example of her 2000 election to the Senate. New York voters had doubts too, but came to know her as a hard worker and effective representative, she said.

“You can’t just talk someone into trusting you. You’ve got to earn it,” Clinton said.

She then drew an implicit comparison with Republican presidential candidate Donald Trump.

Clinton praised last week’s protest by House Democrats, who refused to leave the chamber for 26 hours to call attention to what they called the refusal of Republican leaders to allow meaningful debate about gun control.

Trump wants to eliminate gun-free zones around schools, Clinton said. She has previously accused him of being in league with the NRA.

“This is someone whose reaction to the Orlando attack was to publicly congratulate himself,” Clinton said to whoops from a large audience at a hotel conference center.

“Every day Donald Trump proves he’s not in this to be president, he’s in it for himself,” Clinton said. “He’s temperamentally unfit to be president.”

Clinton said mass shootings like Orlando and other events are challenging the status quo in Congress, where gun control measures have made no headway under Republicans she accuses of doing the bidding of the gun lobby.