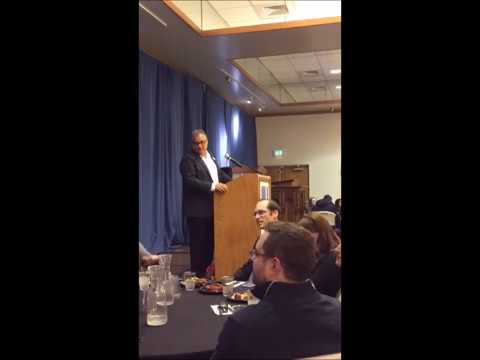 >>Follow Matzav On Whatsapp!<<
Sunday March 24th was a historic day in Jewish history, not just for Columbus, OH but for the entire Jewish world.
The 3rd Annual Columbus United Siyum Hatorah was celebrated by over 250 participants of all backgrounds, affiliations, and levels of observance. It’s a project that beidges the gap between regular Torah scholars and those who have barley ever learned all within Torah study. The theme by this year’s celebration was to dedicate the learning in memory of the victims of the October shooting in Pittsburgh.
The event started with a lavish hot buffet in the Schottenstein Rooms at Columbus’s state of the art Jewish Community Center. The program was opened by the evenings emcee, Joel Greff. He talked about how he started his learning thinking that it would be a one time thing but it turned into a meaningful experience coming twelve weeks in a row until he finished Meseches Brachos. “The Kollel sought to fight anti semitism through unity in a Torah learning experience and they were extremely successful” remarked Greff to a loud applause.
His remarks were then followed by Rabbi Hillel Kapenstein, Outreach Coordinator at the Kollel and founder of Columbus United Siyum Hatorah. Rabbi Kapenstein talked about how this evening is really bittersweet. For on one hand the learning is being dedicated in memory of the kedoshim of Pittsburgh which left a void in everyone, but on the other hand look how many people came to participate. This whole annual Siyum Initiative started a couple years ago with only forty members of our community and grew to about 110 or so last year. This year we are over 250! “I don’t pretend to know a lot about stocks and investments, but I’m sure we can all agree starting with 40 and getting to 250 is an incredible achievement. We have what to be very proud about” remarked Kapenstein.
Then came perhaps the most emotional part of the evening. Dr. Michael Kurin, nephew of the late Joyce Fienberg, took the podium. He reminisced about his aunt and talked about what his family has been going through ever since that tragic day. Kurin then recited the last Mishnah in Meseches Uktzin followed by the Hadran and Kaddish.
Greff returned to the microphone to introduce the Keynote Speaker. “Charlie and I spent time in Israel for our JWRP Men’s trip, and my life was changed forever. Ladies and gentlemen, please give your undivided attention to Charlie Harary!”
Harary began talking about his long lasting relationship with Columbus having spent Shabbos with Rabbi David Stavsky Zt”l many years ago. “I feel like I’m sort of back home when I’m back in Columbus” he noted.
Harary then continued to relate one of the greatest lessons to be taken from the Purim Story. He mentioned how Esther was nervous about approaching Achashveirosh in fear of what would happen when she enters uninvited. Mordechai answered to her letting her know that she and her family may be lost forever if she doesn’t give it her best for perhaps it is this moment why Hashem put you here.
Charlie continued, “What Esther was faced with was a choice between comfort or greatness. She chose greatness and that’s why we are all here today. Is there a better way to honor the victims of Pittsburgh than by following Esther’s lead? All of you who learned did so when you had long days, didn’t fully understand the text at the first glance, but nevertheless chose greatness over comfort. What a way to honor those who died Al kiddish Hashem!”
The event concluded with Joel Greff saying how we should continue our weekly TNT (Tuesday Night Torah) Learning and keeping the flame alive which the Kollel will make sure to do just that.
The night was not over. Just one hour later, Charlie met with an exclusive group of young and upcoming leaders at the home of Meir Perlmuter. They discussed strategic ways that young people can be active and influential in their respective rolls in helping the Jewish community grow.