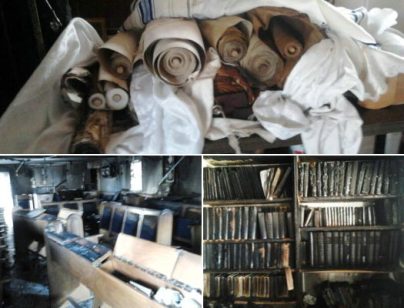 Netanya – A fire that started in the Shifat Revivim shul in Netanya last night burned ten Sifrei Torah, some of them seriously. There were no human casualties.

Naftali David, who leads the Hatzolah organization in the Sharon valley, said that “the firefighting teams who reached the aron kodesh rescued the Sifrei Torah, but 7 of them had been incinerated entirely. Three more Sifrei Torah were very badly damaged. It was painful to watch.”

Many seforim were burned as well before firefighters managed to put out the blaze.

The suspected 20-year-old arsonist has been apprehended. He is also a prime suspect in the burning of a nearby shul two days ago.