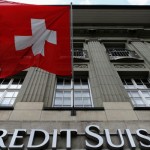 The U.S. and the bank reached a plea deal in which Credit Suisse agreed to pay $2.6 billion in penalties and hire an independent monitor who will oversee it for up to two years. It is the first time in over two decades that a major bank has pleaded guilty to U.S. federal criminal charges.

The plea deal is a major blow to overseas tax dodging and marks a new aggressiveness on the part of federal prosecutors. Credit Suisse may be only the first among several banks to plead guilty to the feds. France’s BNP Paribas is expected to do the same in a few weeks. Read more at New York Times.