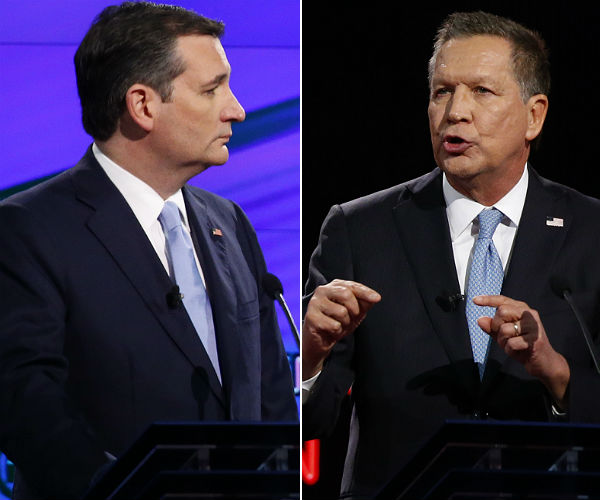 A sudden political alliance between Ted Cruz and John Kasich against Republican presidential front-runner Donald Trump quickly ran into speed bumps Monday that exposed the plan’s risks and called into question whether it would work.

In their unconventional last-ditch scheme, Kasich said he would clear the way for Cruz to face Trump in Indiana while Cruz would return the favor in Oregon and New Mexico. The plan aimed to produce what anti-Trump Republicans have yearned for since the fall: a one-on-one showdown with the mogul.

But less than 12 hours after the pact was announced, Kasich undercut the idea by declaring Monday that his supporters in Indiana should still vote for him. The Ohio governor also plans to keep raising money in the state and to meet Tuesday with Republican Gov. Mike Pence.

Cruz, meanwhile, said that Kasich was “pulling out” of the state. A super PAC supporting the senator from Texas also said it would continue to air an anti-Kasich ad in the state – a sign the Cruz camp fears Kasich could still peel away enough support to sink Cruz’s chances here.

The tumult fueled doubts about the arrangement among voters and Republican elites, who worried that Cruz and Kasich have handed Trump a ready-made argument that the party establishment is plotting against him. The mogul said as much in a series of stump speeches on the eve of primary voting on Tuesday, when Trump is poised to rack up delegates in five Eastern states: Connecticut, Delaware, Maryland, Pennsylvania and Rhode Island.

“Honestly, it shows such total weakness, and it’s pathetic when two longtime insider politicians – establishment guys, whether you like it or not – have to collude, have to get together to try to beat a guy that really speaks what the people want,” Trump said at a rally in Warwick, Rhode Island.

Cruz and Kasich are bound by two self-serving goals: winning enough delegates between them to prevent Trump from clinching the nomination outright and trying to demonstrate that he isn’t favored by most Republicans.

If those goals are met, July’s Republican National Convention in Cleveland is likely to be a free-for-all offering Cruz and, perhaps, Kasich a shot at the nomination.

Already on Monday, many Republicans were dubious.

“It’s hard to assess whether it will have any significant impact,” former Minnesota governor Tim Pawlenty, who supported Florida Sen. Marco Rubio and is neutral now, said by email. “Voters tend to stick to their preferred candidate for personal, not tactical, reasons.”

The marriage of political convenience was announced in separate news releases late Sunday night by the two campaigns. But it was immediately put to the test early Monday, when Kasich said at a news conference at Philadelphia’s Penrose Diner that any Indiana voter inclined to vote for him should do so.

Just hours earlier, Kasich’s campaign co-chair in Indiana was saying the opposite. “Kasich is asking his supporters in Indiana to vote for Cruz so Trump does not win Indiana,” Carmel Mayor Jim Brainard told the Indianapolis Star, suggesting that Cruz would do the same with his voters in Oregon and New Mexico.

Kasich scrapped his public events in Indiana, but he still plans to meet with Pence – as Cruz and Trump did last week – and to hold a fundraiser in Indiana on Tuesday, according to Kasich campaign consultant Pete Seat.

The announcements on Sunday did not specifically say what the candidates’ voters should do, but the intent was clear: to try to help Cruz win Indiana on May 3 and to help Kasich claim Oregon on May 17 and New Mexico on June 7.

Outside groups supporting Cruz and Kasich and opposed to Trump appeared mostly keen on the plan. But the pro-Cruz super PAC Trusted Leadership said it planned to continue broadcasting an anti-Kasich ad in Indiana while ceasing plans to air ads in Oregon and New Mexico.

Speaking to reporters before a rally here in Borden, Cruz said it was “big news today that John Kasich has decided to pull out of Indiana to give us a head-to-head contest with Donald Trump.” He said the division of resources in key primary states “made sense from both campaigns.”

At Cruz’s rally, where he did not mention he was ceding Oregon and New Mexico, there was some skepticism about whether the plan it would help the senator from Texas in next week’s primary or instead bolster Trump.

“It could go either way,” said Pat Cambron of Borden, who is deciding between Cruz and Trump.

“It might be a little late,” said Mary Jean Halbleighb, a Cruz supporter from Floyds Knobs.

The deal was discussed in a private meeting last week between Cruz campaign manager Jeff Roe and Kasich chief strategist John Weaver on the sidelines of the Republican National Committee’s spring meeting in Hollywood, Florida, said a person with knowledge of the discussions who spoke on the condition of anonymity. The deal was finalized Sunday in phone calls between the two advisers.

Limited public polling in Indiana has shown that Cruz stands the best chance of stopping Trump on May 3. Cruz and his allies were worried about Kasich pulling critical votes away from him in the Hoosier State.

Kasich’s campaign said it sees similarities between Oregon, New Mexico and the Northeast, where Kasich’s centrist pitch has won him more support than Cruz. But Kasich has struggled overall, notching his only win in his home state.

Overall, Trump leads the Republican race with 845 delegates, according to the latest Associated Press count. Cruz has 559, while Kasich is much further back with 148. To win the nomination outright, a candidate must clinch 1,237 delegates. If that doesn’t happen, a contested convention will be triggered and the nomination will be up for grabs.

At a town hall meeting in Rockville, Maryland, Kasich assured the crowd that an open convention would be good for Republicans and for the country, and suggested that voters were figuring that out.

“Some guy, when I was walking into this diner this morning, shouted out: ‘It’s so nice to see you, Governor Lincoln!’ ” said Kasich. “You go hit Google and find out what he could mean by that, OK?”

He was referring to a fact that the campaign later pushed out on Twitter – at seven of 10 open conventions, the eventual winner was not the candidate who entered as the favorite, including Abraham Lincoln in 1860.

In his back-and-forth with reporters, Cruz was pressed on Trump’s assertion that he was engaging in collusion. Signaling how he intends to define himself against those claims, Cruz quickly pivoted away from his own actions and toward his rival.

“Yes, I understand the Trump campaign is going to scream and cry,” he said. “That’s what they do.”