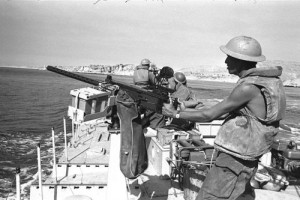 A newly declassified Central Intelligence Agency (CIA) report sheds new light on how the U.S. intelligence community viewed the outbreak of the 1967 Six-Day War, suggesting American officials were surprised by the clashes.

“Hostilities began early this morning,” reads the President’s Daily Brief (PDB) from June 5, 1967, which was classified as Top Secret. The report, in the form of a detailed intelligence summary, was presented to President Lyndon B. Johnson. It notes that “both sides report heavy fighting in the air and between armored forces along the Israeli border with Egypt.”

The brief later indicates that Israel fired the first shot of the war, stating, “Reports are still fragmentary, but the signs point to this as an Israeli initiative.”

It would later become apparent that Israel had indeed taken pre-emptive action after concluding that the diplomatic efforts to end a several-week standoff had failed. Operation Moked, launched in the early hours of that day, essentially decimated Egypt’s air force and secured Israel’s triumph in the war. “Israeli planes raided airfields in Cairo and other areas beginning at about 8:00 a.m. local time (2:00 a.m. Washington time),” the CIA report reads.

The brief is one of the roughly 2,500 PDBs from the Johnson and John F. Kennedy administrations that were officially released by the CIA on Sept. 16, along with a 40-page booklet describing the documents and the PDB process during that period.