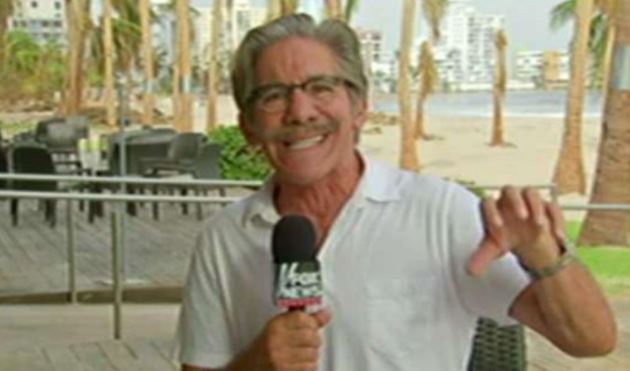 Fox News host Geraldo Rivera flew to Puerto Rico after the hurricane and – despite grim reports from the devastated island – has not yet witnessed anyone die.

He shook hands with the governor, and no one died. He flew in a big U.S. Marine Corps helicopter. Zero casualties. A week after the hurricane destroyed the island’s infrastructure, leaving hundreds of thousands of people without electricity, desperate for food and drinking water, Rivera met 84-year-old “Aunt Ellie.”

“She had us all worried but she’s doing fine thx,” he wrote on Twitter.

And so after several days on the island, Rivera decided to weigh in on a debate between President Donald Trump – whose administration has been accused of being slow to help the U.S. territory – and San Juan Mayor Carmen Yulín Cruz Soto, who famously pleaded, “We are dying, and you are killing us with the inefficiency and the bureaucracy.”

The official death toll in Puerto Rico stands at 16, but is expected to rise as rescue workers struggle to distribute basic supplies and families prepare to live for weeks or months without power.

A Fox News anchor noted this on Sunday, as he introduced Rivera’s debate with the mayor about death and Trump.

Before he launched into his “exclusive” interview (which it was not), Rivera criticized the U.S. government’s response.

“I don’t know why the skies aren’t filled with relief aircraft,” he said.

“What I really lament in this politically driven island, where you have a Republican governor and a hard left-wing Democratic mayor, is that the mayor is blaming Donald Trump for the lack of aid.”

Then on to the interview, in which Cruz would point out she is not in fact a Democrat, and explain the nuances of “dying.”

“The aid isn’t getting here as quick as it should be getting here,” the mayor told Rivera, as workers packed boxes behind her. “There are people in all municipalities literally starving, dehydrating.”

There was no electricity in most of the island, and frequent brownouts in the hospitals, she said – and meanwhile the Federal Emergency Management Agency “asks people to register on the phone or Internet.”

As in her past remarks, Cruz praised the federal government’s intentions, while criticizing its performance.

“Common sense has to prevail,” she said.

“Well, dying is a continuum, right?” Cruz said. “If you don’t get fed for seven to eight days and you’re a child, you are dying. If you have 11 people like they took out of a nursing home, you are dying.”

“Don’t you wish you had characterized that a little more?” Rivera asked, but the mayor cut him off.

Since she first criticized Trump’s government on Friday, the president has called Cruz a weak leader and complained of “politically motivated ingrates” on the island. The mayor has mocked the president’s ire, but otherwise argued that politics have no role in the relief effort.

Next question: “How much of that is politics, the fact that you and the president are different parties?” Rivera asked. And she corrected him.

Trump had accused Cruz of being controlled by the Democratic Party, and Rivera had erroneously said she belonged to it.

In fact, as The Post reported, the island’s party system is different from the mainland United States. Republicans and Democrats have little bearing on Puerto Rican politics. And while Cruz has been friendly with some mainland Democrats, her Popular Democratic Party is defined largely by its stance in Puerto Rico’s independence from the United States.

“I’m not a member of the Democratic Party,” she told Rivera, who did not ask another question in the clip.

“I could find no one dying,” the host summarized after the segment, the second half of which will air on Fox on Sunday night.

Still intent on forging a truce between the mayor and the president, Rivera chided Trump for tweeting about Cruz and ingrates and such.

But that mayor. “She’s very partisan,” Rivera said. “I think she has a loathing for Donald Trump.”

“I think she needs an open heart and some gratitude,” he concluded.

The mayor had in fact spoken of open hearts in her nonexclusive interview. And Trump had accused her of mislaid gratitude. So in the end, maybe Rivera found common ground after all.