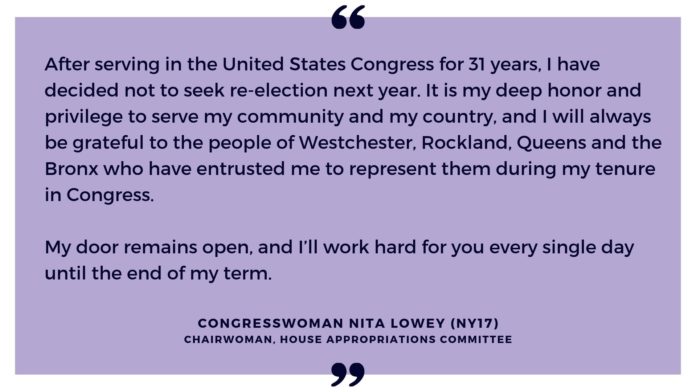 US Rep. Nita Lowey (D-NY) announced on Thursday that she won’t seek re-election next year, following a three-decade-long career in Congress as a staunch supporter of the US-Israel relationship.

“As the chairwoman of the appropriations subcommittee that writes the foreign-aid bill, I have advanced record funding for women’s health and basic education, especially for girls, around the world, a strong US-Israel relationship with bipartisan support and other investments that support American interests abroad,” she said in a statement.

Lowey, one of 25 Jewish Democrats in the US House of Representatives—all of whom have called for the impeachment of US President Donald Trump’s—has been a fixture at the annual American Israel Public Affairs Committee Policy Conference as a prominent supporter of Israel on Capitol Hill.

Members of the Jewish and pro-Israel community expressed their appreciation for Lowey, who became the first female chairwoman of the House Appropriations Committee after the Democrats won the House majority in the 2018 midterm elections.

“Nita Lowey has been a tireless and invaluable champion of the US-Israel relationship,” AIPAC spokesperson Marshall Wittmann told JNS. “That bond has grown tremendously, thanks largely to her transformative leadership, support and stewardship of security aid through the Congress each year.”

“We are sad that Chairwoman Lowey will not seek re-election, but are delighted for her and her family as she completes a distinguished career in the House of Representatives,” its director of communications, Logan Bayroff, told JNS. “We are grateful for her lifelong championship of robust US diplomacy and aid, multilateral cooperation, a strong US-Israel relationship and for her leadership in the quest for a two-state solution to the Israeli-Palestinian conflict. Her counsel and tireless work on these and so many other issues of importance to America’s place in the world will be missed.”

“Congress is losing one of its most impactful members and greatest supporters of a strong US-Israel relationship. There is no doubt that @NitaLowey will be missed,” tweeted William Daroff, senior vice president of public policy at the Jewish Federations of North America.

“Chairwoman Lowey has been a champion of liberal values including a strong US-Israel relationship. Her legislative know how is unparalleled and her accomplishments legion,” Democratic Majority for Israel President Mark Mellman told JNS. “While we will miss her in Washington; the mark she has made here and in New York is indelible.”