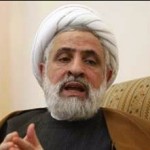 The Hezbollah terror group continues to see Israel as its central enemy and not the rebels in Syria, the group’s deputy leader said on Thursday. “Israel is the main enemy,” Sheikh Naim Qassem said, according to the Lebanese Daily Star.

“But the tactical priority depends on the direct threat, so our confrontation with takfiri (extremist) groups derives from the direct danger they represent, and it does not affect our readiness to confront Israel,” he declared.

Qassem gave the speech in a conference organized by the Institute of Wisdom Knowledge as part of the Permanent Conference for Resistance. The institute is a research school close to Hezbollah that specializes in philosophical and religious studies, according to the Daily Star.

The talk focused on demonstrating that Israel’s existence is illegitimate, that the country is an eternal enemy to Lebanon and all Arabs, and that armed resistance is the right way of confronting it. “Israel is the enemy of humanity and truth,” said Qassem. “It cannot coexist with anyone.”