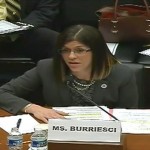 If you thought Department of Homeland Security’s Deputy Assistant Secretary Kelli Ann Burriesci’s inability to answer Rep. Trey Gowdy’s question on simple due process regarding the terrorism watch list was bad, it wasn’t any better when Congressman Jim Jordan (R-OH) asked how many people have overstayed their visas, along with the number of Syrian refugees that have entered the United States. Burriesci couldn’t give a figure to those two questions during the House Oversight Committee’s December 10 hearing on terrorism watch lists and the visa waiver program.

“How many Syrian refugees have entered in the United States last year?” asked Jordan.

“Sir, I didn’t bring any of my–any of the refugee numbers with me because I was prepared to talk about visa waiver, but I can certainly have us send that to you,” replied Burriesci.

“Do you know how many Americans have traveled to Syria last year?” asked Jordan.

“I don’t have that number on me either,” said Burriesci.

“So, you wouldn’t know how many Americans have traveled and then returned,” continued Jordan.

“I don’t have that number one me,” Burriesci said again.

Jordan continued by asking her how many people have overstayed their visas that are in the waiver program.

“Sir, I didn’t bring that number with me,” said Burriesci yet again.

Jordan noted that Ms. Burriesci had the longest title of anyone called to testify before the committee, noting that her official title is Deputy Assistant Secretary, Screening Coordination Office of Policy Department of Homeland Security.

He then invoked the ISIS-executed terrorist attacks in Paris and the horrific San Bernardino shooting, which is increasingly looking like a terror attack, noting that they deal with the questions he’s asking about–visa waiver and Syrian refugees–and that the DHS can’t give any numbers on both of those programs.

Burriesci replied – again – that she was prepared to talk about the visa waiver program, which Jordan interjected by saying that he just asked her how many people with visa overstays are currently in the U.S., and she couldn’t give him an answer.