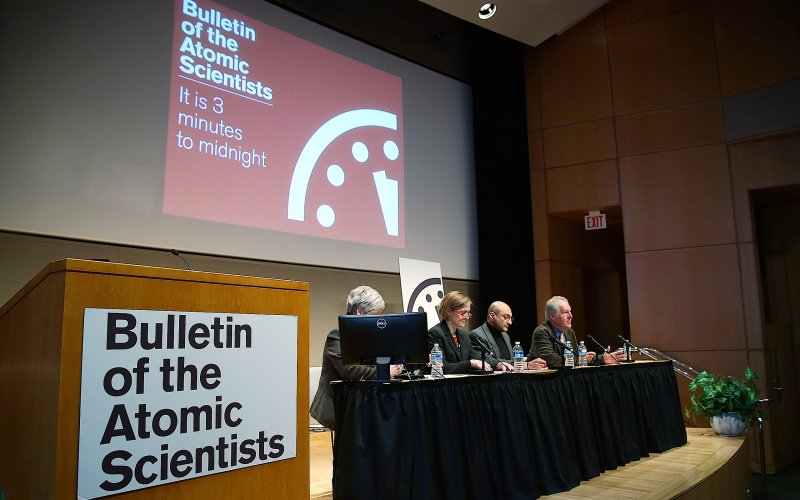 The Bulletin of the Atomic Scientists advanced the symbolic Doomsday Clock a notch closer to the end of humanity Thursday, moving it ahead by 30 seconds. It is now set at two minutes to “midnight.”

In moving the clock 30 seconds closer to the hour of the apocalypse, the Bulletin of the Atomic Scientists cited “the failure of world leaders to deal with looming threats of nuclear war and climate change.”

The organization now believes “the world is not only more dangerous now than it was a year ago; it is as threatening as it has been since World War II,” Bulletin officials Lawrence M. Krauss and Robert Rosner wrote in an op-ed published Thursday by The Washington Post. “In fact, the Doomsday Clock is as close to midnight today as it was in 1953, when Cold War fears perhaps reached their highest levels.”

Krauss, a theoretical physicist, and Rosner, an astrophysicist, added: “To call the world nuclear situation dire is to understate the danger – and its immediacy. North Korea’s nuclear weapons program appeared to make remarkable progress in 2017, increasing risks for itself, other countries in the region and the United States.”

The clock, a metaphorical measure of humankind’s proximity to global catastrophe, also advanced 30 seconds last year, to 2 1/2 minutes to “midnight” – the closest to the apocalyptic hour it has been since 1953, after the United States tested its first thermonuclear device, followed months later by the Soviet Union’s hydrogen bomb test.

Before Thursday’s announcement, experts said there was only one direction the clock could possibly move, given recent geopolitical events – including North Korea’s intercontinental ballistic missile test and the my-nuclear-button-is-bigger-than-yours war of words between Trump and North Korean leader Kim Jong Un.

“I think it would be very hard for the clock not​ to move forward,” Alex Wellerstein, who specializes in the history of nuclear weapons at the Stevens Institute of Technology, said in an email leading up to the announcement. “We have members of Congress, White House advisers, and even the president implying that they think war with a nuclear state is not only likely, but potentially desirable. That’s unusual and disturbing.

“The question I have is: How much forward can they go?”

Another 30 seconds, to be exact.

The clock is symbolic, sitting at the intersection of art and science, and it has wavered between two and 17 minutes until doom since its inception in 1947.